Sonalysts have done a good job of representing the various platforms. They have taken a minimal approach with the textures and shape (that is, they have kept the essence of each platform without the clutter that you see in the archive photo). Despite the minimal approach, the platforms present excellent in game.

The majority of platforms are well done. Some such as the British Type 42 DDG are a work of art, yet some platforms such as the Iranian Houdong WPTG has only a passing resemblance to the archive picture, it is not a wide spread occurrence. I did not personally find this an issue and in no way did this impact upon game play.

The shadow and reflection effects are beautiful to behold and had me going around in circles with the Oliver Hazard Perry ship for about five minutes going “oooh that is cool”. 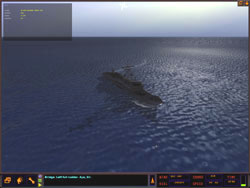 The wave action looks realistic and the water looks great, one of the best I have seen. Nevertheless, it still looks artificial. It always has a ‘shine’ even when at a sea state of 5 with a wind of 45 knots. To be fair I do not know anyone who has come close to truly representing the look of the ocean.

Nice touches that those of us with a submarine will rarely appreciate are the 3D clouds, the rain and the lightning during storms.

The land and the waters edge (the coast) are featureless and drab. An unattractive flat 2D dark green tile with the odd ‘rock’ or ‘snow’ tile thrown in is it. There are 3D trees, but they are so small and so far apart they blend into the green of the land mass. 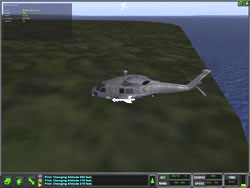 All land masses have a gentle slope from the waters edge.

Cities are a flat 2D image that requires the player to be sitting right upon the tile to be able to see it. Only from a great height can you see what the tile is supposed to be representing. It is easy to miss a ‘city’ when cruising right past it.

As you would have guessed, you will find no 3D cities or towns on the world map and there is little in the way of buildings that could be used to make anything even resembling a small town. As such, when the limited but great looking buildings or structures are used, they tend look very out of place.

The lack of anything resembling civilization coupled with the featureless coastline can detract from missions played near land, especially when they are based upon a known location. The mission ‘Tokyo Harbour Cruise’ would have been better titled ‘Lunar Lake Cruise’.

For the amount of time a player will spend in and around coastal waters I am surprised by the lack of work done on this part of the game.

The various platform stations are well drawn with all the data and labels being easy to read. The stations themselves are laid out in a way that makes the use of each station a breeze. All platform stations, apart from those on the Oliver Hazard Perry are well lit. The stations on the Oliver Hazard Perry are ‘rigged for red’, it is a personal thing, but as a result I do not enjoy being in the Perry’s stations.

Other platforms look great viewed from either the periscope or the bridge. They look as if they are actually sailing through and not ‘on’ the water. 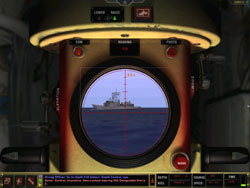 Do not expect to see a hole in the side of a ship where your missile hit as damage displayed on ships is very minimally done and it is difficult to tell from a look through the periscope. There also is very little difference between ships with 20% damage to a ship with 75% damage. 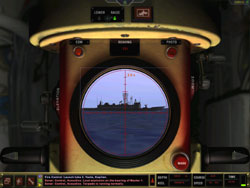