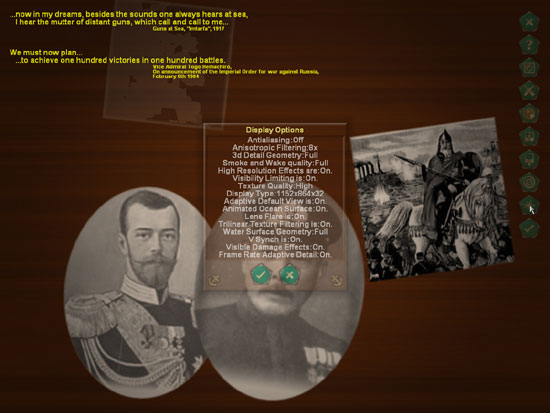 Overview of the Game

This is a pretty far along beta and according to Norm Koger this game is very close to release. The game is a tactical level naval simulation which is in the same vein as Fighting Steel or Age of Sail. As commander you can control fleets as small as one ship up to fifty plus fighting vessels.

The major fighting ships of the period are recreated in this game, and created with pretty accurate detail. This is the pre-dreadnought era where ships mounted a wide variety of weapons and ships made just 10 years earlier were considered old and obsolete. This was an age of remarkable warship design. HMS Dreadnought, the prototype for the modern battleship was just a couple of years away.

Ship classes range from destroyers to the battleships fielded by both navies. Each ship is rendered in an accurate manner and watching them sail brings a feeling of nostalgia. These ships were works of art as well as warships and looking at them brings you back to a time when imperial ambition manifested itself in such warships.

The interface for the game is clean and easily accessible and set up very well. The interface takes a back seat to the game engine and only becomes visible when you want to access something. The entirely 3d engine emphasizes watching the ships in action. While in the background until you access it, the interface is powerful and takes some getting used to.
Most of the commands given to the warships are fairly easy to figure out. There was a 150 page pre-manual that came with the game that instructed on how to use the commands to best effect. Probably most admirals will find the commands to move ships the most difficult to perform properly. Since the game starts out with most ships in line already, effectively moving your warships requires a deft touch. I found that I could quite quickly create chaos among my fleet by giving commands that sent ships into other ships. Warships can collide and if you aren’t careful they will.

In the interface you can command your ships to turn by following the leader, to immediately turn. You can set speed, give fire commands and order ships to target specific targets. The interface also allowed you to view the condition of your ships, your ammo levels and level of damage or flooding.