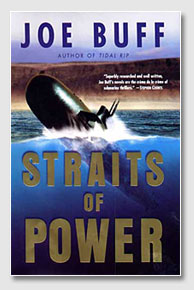 I think we all know that one of the best ways to spend a winter weekend is curled up in a warm bed, with hot tea and a good book. Thanks to Fran Mulhern’s referral of Straits of Power

, that’s what I did.Straits of Power is a neat Clancyesque jaunt into an alternative future in which Big War readers will find many things to enjoy. Its plot is a little over-the-top, but the author’s military-tactics and hardware knowledge enable the real stars of the story — the submarines — to shine through and keep your attention on the printed page.

Author Joe Buff, a life member of the U.S. Naval Institute among other impressive Naval technical organizations, has a grognard’s knowledge of modern submarines. He’s written several novels on the subject, all set in a third World War, which begins in 2011, seventy years nearly to the day after World War II — a new world war where Germany is resurgent, led by a modern Kaiser who is a figurehead for ultranationalist corporate oligarchs. Their ally is South Africa, where in Buff’s brave new world the Boers have risen, bringing apartheid with them once again and forming with Imperial Germany a new Axis. France surrenders on the eve of war. Warsaw is wiped out by nuclear weapons. War at sea between the new High Seas Fleet and the U.S. and British navies is a tactical nuclear one. Turkey and the Islamic world are watchfully neutral. Russia is arming the new Hohenzollerns and their war machine. The Allies are having a hard time in Africa, and Israel and Egypt have formed a military alliance. Straits of Power, which I think is the fifth novel in this timeline, finds the U.S. confronting a new threat, and with a new opportunity: a German defector, with a terrible secret.

Sound a little far-fetched? I thought so, too. Herein lies the greatest weakness of Buff’s story line. It is supposed to be happening only seven years in our own futures, and it bears almost no resemblance to events we know today. There is very little mention of the War on Terror, and no reference at all to Iranian nuclear capability, which is one of the Bush Administration’s currently hot foreign-policy priorities. How has the U.S. calmed the hatred of the West in the Islamic world so fast? Has the War on Terror ended so soon? This strained my willing suspension of disbelief.

Buff’s protagonist is Commander Jeffrey Fuller, a Medal of Honor winning ex-Navy SEAL and current commanding officer of the most advanced nuclear submarine in the American fleet: the USS Challenger. Challenger’s ceramic-composite hull allows her to dive to enormous depths. Fuller and his crew are combat-tested and highly trained. Straits of Power makes clear that much has gone before on Challenger, and with her crew. Frankly, I felt a little lost, reading about Commander Fuller’s past exploits and battles, without having read Buff’s earlier works. If you like this sort of fiction, I recommend greatly that you start with Tidal Rip

, which I think is the first book in the Fuller cycle. You probably won’t be as lost as I was. Also, you might think a little better of Fuller than I did — I see Commander Fuller as what my husband would call a “Mary Sue.” In the world of Harry Potter fan-fiction, which my husband enjoys, a “Mary Sue” is the Perfect Hero — one with absolutely no flaws. Fuller’s the perfect commander: stern, tough, hardened. The ghosts of past combat have only toughened him, and nothing interferes with his single-minded pursuit of his goal: victory. He’s Absolutely Perfect in every way. That never endears a character to me, and it is something I worry a lot about with the Sacha Andreeva short-stories I write for you here. I’ve tried to keep Sacha from becoming too perfect. I think that Jeffrey Fuller is a paragon of virtue… and that hurts the “story” part of this book.

Starits of Power follows Captain Fuller and his men on their most testing mission yet. A German, code-named Zeno, holds the key to stopping a new Axis attack in the African theater of war. The message from Zeno is written to Fuller personally, and this does not go down well with the brass and the FBI, who are sure it’s a plot to trap and destroy Challenger at sea. Fuller is teamed with the bombastic Commander Ralph Parcelli of the USS Ohio, an old Trident missile submarine specially refitted to serve as a covert-operations command center for SEALs. With Fuller’s own SEAL team, led by Medal of Honor winner (lot of MoH winners lived in this war!) Lt. Felix Estabo, an ex-mustang Chief promoted on the battlefield, the plan is to sneak into the Axis-controlled Mediterranean, and use a captured German minisub to rescue Zeno, also known as German computer expert Klaus Mohr, from his operating area in Istanbul, neutral Turkey.

While Challenger and Ohio break out of their base in the U.S., fighting German U-boats along the way, we find that Germany has a new class of submarines. Named for U-boat admiral Karl Doenitz, this class of Russian attack submarine is the most advanced in the world. Its captain, Egon Schneider, wants a shot at Challenger for his own reasons. He commissions his brand-new sub and sneaks out of Severodinsk near Murmansk, disguised as a neutral Russian navy submarine on patrol. The cruise of the Grand Admiral Doenitz will also take her to the area of the Red Sea, near where Ohio and Challenger will be operating. And while all this is going on, we follow Ilse Reebeck, a Boer freedom-fighter who is basically Commander Fuller’s girlfriend, working for the Navy back in the U.S., as she is wrongfully accused of being an Axis spy by the over-zealous FBI and persecuted by the American criminal justice system.

Okay, so we really don’t read these sorts of stories for the plot, now, do we? Where Buff’s writing shines is in the part that all us military geeks REALLY want to read. The war scenes. Oh, yes. Buff does a very good job here, rendering vivid portrayals of ship-to-ship-to-sub combat literally all over the world. From a daring breakout by Challenger from the Norfolk naval base and a subsequent combat between two U.S. nukes and three modern U-boats on the continental shelf, to the Gibraltar break-in, the combat scenes liven up the book and keep you reading despite the fact that you really never do get to know or like the story’s characters. The ships themselves have far more character than the people, and in this kind of story that’s all-important. Buff also renders a fun and highly readable account of Lt. Estabo’s SEAL operation in Istanbul to rescue Zeno/Mohr, and a subsequent commando operation in Israel, of all places, starring Estabo’s team and Mohr once again. Frankly, I enjoyed his rendering of the SEAL operations a whole lot more than I did most things where Commander Fuller has center-stage. Buff’s rendering of the covert-ops missions reminds me greatly of Tom Clancy’s Ops Center series, and it is my opinion that Mr. Buff should look that way for more of his future writings.

Straits of Power never slows down; from Virginia’s continental shelf to the Med, from the Marmora Straits to Tel Aviv, and south through Suez as the German offensive begins, where Schneider and Grand Admiral Doenitz wait in the Red Sea, the action is fast and furious. If you like military fiction, and enjoyed the worlds of authors like Patrick Robinson, Stephen Coonts, and Tom Clancy, I think you’ll be able to look past Buff’s plot-flaws and concentrate on the work for what it is: a military techno-thriller that like a warm blanket and a mug of hot tea is a great way to spend a lazy afternoon.

Joe Buff’s web site is here. Watch for his new book, Seas of Crisis to be released January 10, 2006.