OneShot: I was surprised when Dangerous Waters with its much touted multiplayer and multistation co-op play did not ship with any support for a matchmaking service by S.C.S. or Hyperlobby and/or Gamespy. Due to the pressure of the community, overtime you have added support for Hyperlobby and GameSpy. While this is a great leap forward in terms of enabling easier multiplay match ups, Dangerous Waters does not have an in-game browser for GameSpy and we are required to use the GameSpy Arcade software outside of the game. Why is this and will this eventually be changed/addressed in the future?

Jamie: This was an expense that was not accommodated for in development. By the time it was presented to us late in the development it was too expensive to license and too risky to integrate at that stage. We have every intention of integrating an in-game browser for future titles, because we would appreciate that it is a sought after feature for most of the community.

OneShot: Another question on this topic which was aired at the time of release. What was the reason that you did not set up your own multiplayer service for the game? Having made such a solid and robust multiplayer, multiplatform and multistation co-op play game, a component which is a large part of the games success, it is perplexing that S.C.S. did not, and has not, set up its own Multiplayer service for the game as an easy way to find other players?

Jamie: We did not anticipate having the level of multiplayer popularity that has been generated from Dangerous Waters. Historically, our games have been purchased by consumers who enjoy playing in a single-player capacity first and multiplayer later (if at all). Although there are very sizable virtual fleets and naval communities that employ our MP play in their matches, they’ve always coordinated via 3rd party applications outside of the game.

With the integration of Gamespy Arcade and Hyperlobby we hoped that the community and virtual fleets would utilize these applications as the central hubs for matchmaking and for just chatting about Dangerous Waters in general. In time, as the retail release continues to build the customer base and more multiplayer enthusiasts “join the fray”, we hope those applications will provide ample means for matchmaking. 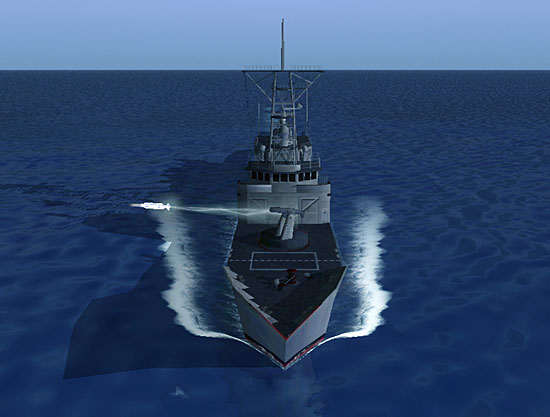 OneShot: While talking about multiplayer, are the developers actively playing online (at least sometimes) and if so, where could I find you to see how I match up to a master such as yourself?

Jamie: We play somewhat sporadically. Over time perhaps we’ll play more often, but having seen the game every day for 18 months during its development, it is certainly not at the top of our list of “digital diversions” for our spare time outside of work… I’m sure you understand. :

OneShot: BattleFront (online sales only) and S.C.S. parted ways after the game was out for nearly a year, with S.C.S. now having teamed up with Strategy First, a publisher who has shelf space in retail outlets. The publishing deal with Strategy First obviously opens up more ways for S.C.S. to sell Dangerous Waters beside online sales. Could you elaborate some more on the why’s of the move away from BFC and to Strategy First?

Jamie: It was simply a business decision. Our agreement allowed either party the option to “terminate for convenience” which is a very legal way of saying “Battlefront or Sonalysts can stop selling the game for any reason as long the other party is given appropriate notice”. So we mutually agreed to end our publishing agreement as Sonalysts attempted to pursue retail opportunities. We were very pleased with the work that Battlefront did on Sonalysts’ behalf.

OneShot: Your next move to expand your distribution options is to make use of Steam in the near future. When can we expect to see this happen?

Jamie: Dangerous Waters can be pre-ordered via Steam on January 24th and will be available on February 7th. More details can be found in the press release here.

OneShot: Has the change of publisher to Strategy First and/or the upcoming Steam distribution meant changes in the Game protection of Dangerous Waters? If so what will you be using?

Jamie: That is still up in the air at the moment. We are hammering out the details required to get the game working within the Steam architecture. I wish I had more information, but at the moment I don’t.

Regardless of what happens, it is our intention that all previous Dangerous Waters customers will be able to collaborate and compete with Steam customers in multiplayer, game protection or not.

OneShot: Aside from distributing the game, will the addition of the Steam service as a publishing platform also mean the introduction of another matchmaking service to the Dangerous Waters community? If so, will it be integrated into the game?

Jamie: Still to be determined.