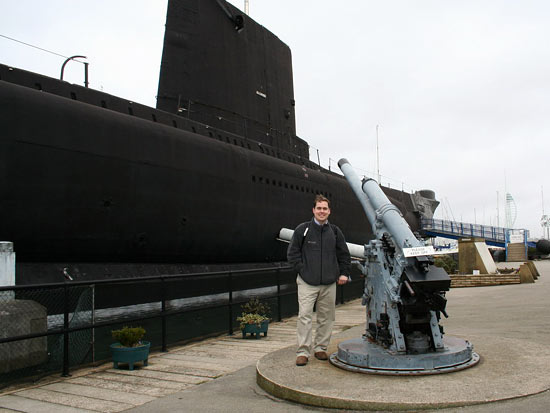 During chit-chat, Jamie let go of some more detailed information.

S.C.S. is currently working on a stand alone replay viewer which is based on the replay viewer for Sub Command. Even so, it needs a lot of work before it will be ready for release in a stable and useable version. That is, for everybody who is not a coder of the game. And there is definitive no ETA for its release.

Patch 1.04 is currently in the Beta test stage. The current emphasis lies on the more accurate handling of the subs, i.e. oscillation, operation at shallow depths and so on. Further work is put in improving game stability and getting rid of some of the more seldom occurring crashes.

A point that was brought up by Olivier during conversation, the generation of a multiplayer online world for S.C.S. Dangerous Waters resulted in the following statements. First, if S.C.S. would undertake such a project it would mean a significant restructuring of the Game Development Group and second (which is more important), such a Persistent Online World is certainly not part of the S.C.S. Business Plan.

Often players ask why there is no ingame browser for GameSpy. Asked this question, Jamie answered that they would certainly like to do that, but the licensing scheme for ingame GameSpy support is different than the one for the GameSpy Arcade service. This essentially means that GameSpy Arcade will continue to be the primary matchmaking service for Dangerous Waters — at least for the short-term future.

One of the regularly asked questions in the forums regarding S.C.S. Dangerous Waters is “When will an expansion be released and what platforms will be in it?”. Jamie’s comment on this was the same as in the SimHQ interview Jamie and I did last January. Some people inhouse are looking at possibilities (i.e. possible platforms) but there is no definitive decision on the types and numbers of new playable platforms as well as an ETA for release. But Jamie mentioned that the concept for an expansion will most likely revolve around balancing the current playable platforms with matching opposing platforms (hence the unofficial name: OPFOR Pack). The most likely choice will be a number of Russian platforms — MPA, Helo and Frigate (or comparable) as well as a western non-nuclear driven submarine.

And don’t forget that the big prerequisite for an expansion is the numbers sold of S.C.S. Dangerous Waters internationally. The “customer install base” just needs to reach a point which will feasibly cover the cost of development plus a small amount of profit to extend the Dangerous Waters universe. If the platforms can be repurposed for government training, then that cost can be lowered even more. The S.C.S. business model allows for a very flexible expected return on investment as long as additional projects are capable of deferring the commercial investment. In other words, buy or encourage to buy a copy for everyone in your family as well as all your friends.

When asked about the graphics of S.C.S. Dangerous Waters, Jamie freely said that he would truly love to have achieved a standard comparable with current games like Silent Hunter III, but unfortunately their inhouse engine is not up to it and they couldn’t afford to buy one of the “off the shelf” graphics engines (which costs quite a bit and would have to be modified to suit the needs). Still, if there is a sequel to S.C.S. Dangerous Waters (or some other S.C.S. game) in the future, it most likely won’t happen on the current engine. S.C.S. most likely would take the step and buy a high quality graphics engine which suits or is easy to modify to their needs.

Well, all good things come to an end and that included the launch day. On the way back to the hotel after leaving the ferry, we parted ways and moved onto our accommodations to catch some shut-eye and something to eat. The next day I spent mostly traveling before finally returning home at night.

All in all, it was a great experience and while the details on the game were nothing new to me (okay, playing the game for over a year helps) the stuff on the side was enlightening.