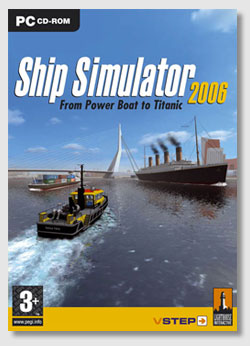 I’ve always said that if I hadn’t gotten into aviation, I probably would have steered myself toward something nautical. The act of piloting a tugboat, ferry, or merchant vessel shares many of the skills and knowledge inherent to aviation. In fact, many of the terms and concepts in aviation are direct descendants of nautical knowledge. While there have been relatively regular releases of naval combat simulations, the market for civilian ship simulations has been relatively small. Programs such as Virtual Skipper or Port of Call found a home with more hardcore ship and sailing buffs, but there haven’t been any widespread, big budget programs until now. A company called VSTEP (Virtual Safety Training & Education Platform), based in the Netherlands, specializes in custom tailored software for industry that allows customers to train for job specific tasks that are either too expensive, or too dangerous to train for in reality. VSTEP saw the potential for a ship simulation for the general public and have capitalized on their in-house expertise with the release of Ship Simulator 2006. I doubt the similarity in font choices to the Microsoft Flight Simulator series was unintentional; score one for the marketing department!

Ship Simulator 2006 is available in either a boxed version, or download. My boxed review copy was sent via post to the United States but you will have to check with VSTEP to find out how to acquire this product in the U.S. It is my understanding that the program has been released in Europe and that a slightly different version, featuring the inclusion of the Port of New York, will be available in the United States soon (a video preview of the Port of New York is now available on the Ship Simulator 2006 website). If you don’t want to wait, you can still order the download version from VSTEP via credit card no matter where you live. At the current exchange rate a rough cost estimate is running about $34.00 US.

The boxed version comes on a single CD-ROM which installs without a hitch. The install footprint is approximately 650MB; once installed the CD-ROM is not required to play. Pay close attention to the system requirements because they are steep; the recommended setup is a P4 2.0Ghz, 1GB RAM, and a GeForce 4 card with 128MB RAM or better. I was able to max the graphics out on my Alienware, but my Toshiba laptop (P4 1.6, 64MB GeForce 4) choked on the graphics.

The sim can be configured for a multitude of different resolutions and graphics options appropriate to your hardware. The control settings suffer serious shortcomings however, with the complete inability to map or configure controllers to anything other than the four default settings. For a flight simmer with a HOTAS you would expect that the logical configuration would be to set your throttle quadrant as the power levers, with the center position being neutral, forward being forward power, and backward being reverse power. A standard Saitek throttle would actually closely resemble the power levers on some ships. Unfortunately, you will not be able to map the sim controls to your throttle. Instead, the flight stick will control the engines and steering. While some ships are indeed controlled by “sticks”, the inability to map two controllers or more, or even to map the bow thrusters to the rudder axis, is a big disappointment. 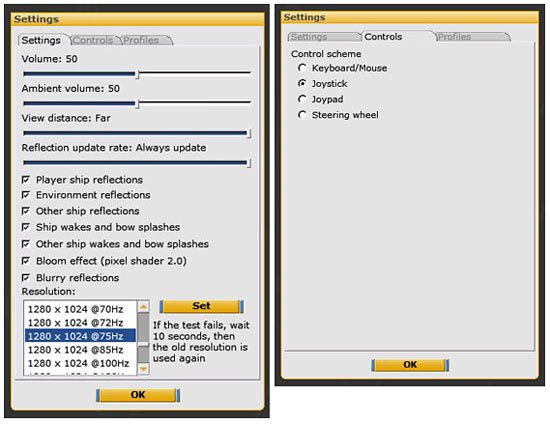