If you ask about the Battle of Tsushima, I suspect the majority of people would give you a blank stare. Indeed, this battle is somewhat obscure even among people who would consider themselves to be fairly well versed in history. Still, if you look at the results of the conflict between Imperial Russia and the Empire of Japan you can understand how this relatively unknown war had implications well into the future.

In 1904, two empires were poised for war. Imperial Russia and Japan both profited by the suppression of the Boxer Rebellion. Russia gained control of Manchuria while Japan took over effective control of most of the Korean peninsula. While initially these two countries maintained cordial relations, the ambitions of both empires quickly put them on a collision course.

The collision was over the anchorage of Port Arthur. Port Arthur represented the only ice free port in the Pacific Ocean. While less than ideal (large ships could only enter and leave the harbor at high tide), the port represented an increase in the potential influence the Russian Empire within the region. In addition, the Russians failed to live up to a promise to remove their troops from Manchuria in 1903.

The conflict kicked off in February of 1904 when the Japanese staged a surprise attack against the Russian fleet anchored at Port Arthur. Destroyers launched around 16 torpedoes at the sleeping Russian fleet; three found their targets. While somewhat poor results were found with the attack, the torpedoes that did explode hit two of the best battleships of the Flotilla. This kept the fleet bottled up at Port Arthur. 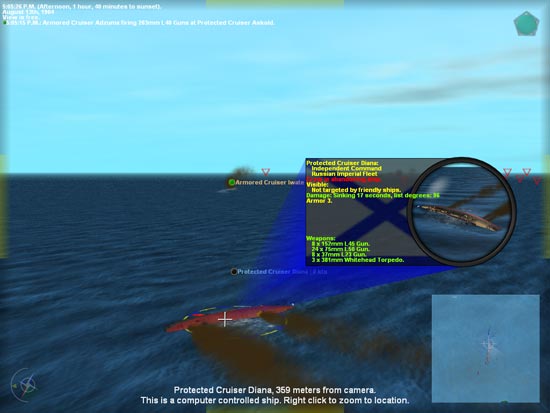 Indecision plagued the Russian leadership in Asia. This didn’t effect their Japanese opponents. The Japanese quickly landed a force east of Port Arthur after a series of small battles cut off reinforcement of the harbor. By August of 1905 the Japanese had hauled large cannons to the bluffs overlooking Port Arthur and began shelling the harbor, and the ships within.

Ultimately the harbor, and the fleet within, were destroyed by the Japanese bombardment. Before their surrender though, a powerful armada led by Admiral Rozhestvensky sailed from the Baltic to relieve the beleaguered defenders at Port Arthur. This force, made up of some of the latest battleships of the Russian fleet, along with some scows that shouldn’t have even considered attempting the 20,000 mile journey, somehow managed to sail from Northern Europe all the way to the Pacific, overcoming distance, logistical problems and the intrigue that made up turn of the century European politics.

Tragically this fleet met its end in the Battle of Tsushima, one of the most lopsided naval victories on record. Tired, relatively untrained (the Russians had to conserve ammunition during the trip which meant little practice during the months of sailing) and with morale dropping the Russian force was scattered and broken by the Japanese force under Admiral Heihachiro Togo.

The ramifications of this battle were telling, even if the knowledge of it is lost on a lot of modern western scholars. The Japanese, completely victorious against a European power, began to feel that not only could they compete with the rest of Europe (and later America) but that their military was invincible. Many of the Japanese high command served during Tsushima or studied the battles closely.

It also signaled the end of the Russian Empire as a significant colonial power. Stripped of her powerful fleet, the Russian Navy never again was a true blue water fleet. It wasn’t until after the Second World War before the Soviet Navy again began to exert its influence on the oceans of the world. Ultimately the defeat began to sow the seeds of discontent among the people of Russia. It is not surprising that the October Revolution began with a mutiny aboard the cruiser Aurora, a warship that participated in the Battle of Tsushima.

Ultimately the battle also changed naval warfare. Large fleet on fleet actions were rare but the battle showed that modern ships tended to fare a lot better in action over older ships, even one that had relatively similar firepower. Newer ships were designed and the idea of the Dreadnought style battleship came about just a couple of years after the battle ended. Ships like the Mikasa, a relatively new and powerful battleship still in her prime, were instantly made outdated when the new USS South Carolina and HMS Dreadnought were dedicated. It was funny that every single ship that fought at Tsushima would be relegated to second line service within five years of that battle.

So here we have it, a game based upon one of the more significant, and forgotten, conflicts of the first half of the 20th century. What do I think of it? Well, read on. 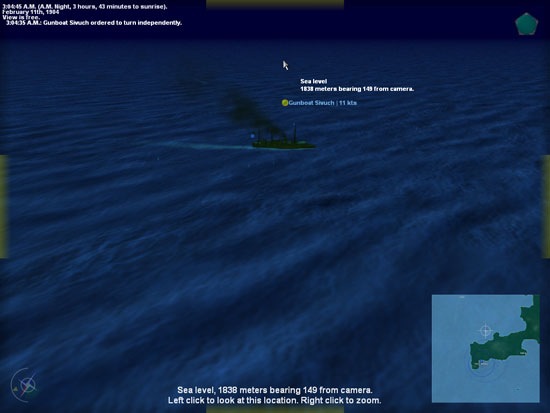