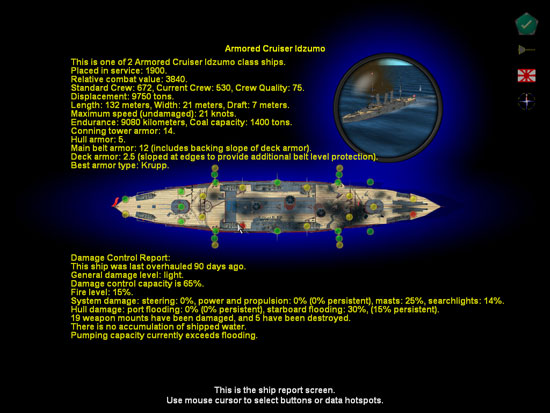 Fire and damage effects are what I would call fair to fairly good. Fires on the ships look realistic and ships show damage when hit but the effects are fairly generic. Some significant changes, even over the initial release of the game, are the changes in graphics related to ship damage. One of my earlier complaints was that ships, although showing smudges and fires, didn’t look that ‘damaged’ even when being pasted by the enemy. Now ships do show stacks canted over, masts damaged, guns out of action and destruction on deck. I have also noticed that stuff will fly up into the air when a ship is hit. It is an improvement over the original release but you have to have your settings pretty much maxed out to see it and on some computers that will mean a performance hit.

Smoke coming from stacks looks realistic but in my opinion the smoke dissipates a little too quickly. Ships from that period were coal fired and low smoke coal was very desirable back at the turn of the century. The Russians didn’t have such coal available and were at a disadvantage when being seen on the horizon.

The game does have a lot of little things that are pretty cool to watch. The guns have a shell cam that follows the trajectory of a round as it heads toward an enemy ship. Gun splashes vary in size and it is cool to see a ship straddled by fire. Searchlights are present on ships and can be damaged. Night battles tended to be blind slugfests and, until the invention of radar, searchlights were about the only way to find the enemy at night.

Sound is well done in the game. The music in the background was a trademark of the old Talonsoft games and is done well in this title as well. It is good that some things never change. Gun sounds and splashes are well made as well. It does sound like these ships are duking it out. The sounds aren’t overly encroaching but they add to the game and improve upon the overall immersion of the title.

Overall I would consider the graphics of the game to be good, if not spectacular. It is hard to compare this game to other games simply because there isn’t much out there in a similar vein. I suppose Dangerous Waters would be the closest as far as games go and this game looks better to me. The graphics are sharper and more realistic. If you compare it to other naval games like Silent Hunter III then the game isn’t quite as detailed — but the game shouldn’t have to be that way.

I do want to clarify this — a lot of people will want to compare this game to both Dangerous Waters and Silent Hunter III because they are the two most recent naval simulation releases. It is hard to compare Distant Guns to those games because both of those games are significantly different in the way they are made up. It is like comparing Steel Beasts and Combat Mission. Both are ‘ground combat games’ but that is about all they have in common. Likewise, comparing Silent Hunter III to Dangerous Waters is really not fair to either game. SHIII looks better up close but you aren’t rendering up to 100 ships fighting out at one time.

In essence the graphics and sound are good enough to get you into the game but not so sharp that they would be a distraction in and of itself.