As “Magnum” stated in a previous article, it’s a big surprise to find myself reviewing a game like Battlestations: Midway. I am also not a big fan of real-time strategy (RTS) games, and consider myself primarily a first-person shooter (FPS) type of guy. Like “Magnum”, I’ve found RTS games a bit tedious for my personal taste. With that in mind, I eagerly awaited the opportunity to see what Battlestations: Midway was all about.

I first heard of Battlestations: Midway sometime around mid-2006 after reading an article concerning “games in development”. Since I have always been a WWII naval warfare buff, the title caught my eye. I have been following its development by reading everything that I can on it, watching every trailer or movie, and I when new screenshots were published, I was on it like a hawk. Earlier this month, I found out that a PC demo was to arrive a week before the full game was released. Were my months of waiting for this game worth it?

Here’s a small Battlestations: Midway history lesson. This WWII naval combat title has been in development for a very long, long time. The game was originally created by a developer named Mithis Entertainment and was at first only planned as an Xbox title. That dev house closed its doors in the fall of 2006 before the game was completed. Rather than let this promising game die a nasty death, EIDOS handed the developmental reigns over to their own Hungarian studios, and refocused it’s release for both the Xbox 360 and PC platforms. The official release of Battlestations: Midway was January 30, 2007.

A good single player game needs a good storyline to set it apart from the crowd. In Battlestations Midway, the tale begins as you are set in the shoes of Navy Lieutenant Henry Walker, a newly commissioned naval officer, captaining a wooden-hulled torpedo boat, right in the middle of the 1941 Pearl Harbor attack. Your gaming challenge throughout the entire single player campaign is to advance through the ranks of the United States Navy to command the largest battleships and aircraft carriers of World War II. That premise alone is straightforward, but accomplishing that task is challenging to say the least.

First of all, the game focuses on the naval and aerial battles of World War II leading up to one of the greatest naval victories of all time, the Battle of Midway. Midway saw the highly outnumbered US naval and air forces take on the might of the most powerful naval force in modern history: the Imperial Japanese Navy.

Here is the description from the manual:

“Battlestations: Midway offers a totally new approach to air, sea and underwater combat, accurately reflecting the atmosphere and situation in the Pacific during 1942. Players take direct control of battleships, aircraft carriers, submarines and planes in a ‘free-control’ environment, with seamless switching between any of the units under your command: engage in dogfights with enemy fighters through flak-infested skies, utilize the silent attack of your submarine to unleash torpedoes on unsuspecting enemies, or command the awesome firepower of an entire carrier group.”

It does just that and somewhat more. I was at first skeptical what Battlestations: Midway could deliver to the casual or experienced gamer because of it’s wide scope of naval combat operations during this point in history. But it does deliver in many ways on its promises — and falls short on some others. 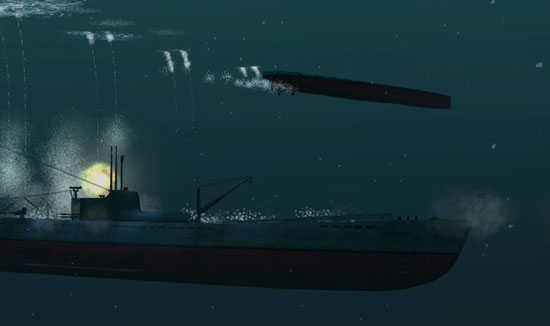