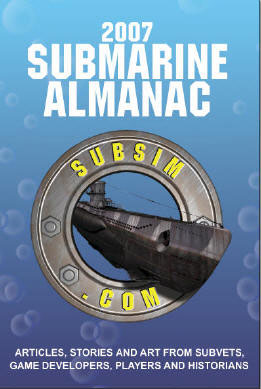 It isn’t normal for me to address all of you in that manner, I know. But on this occasion, I’m taking a leaf out of Neal Steven’s book, quite literally, in fact. I’m reading a neat paperback volume called 2007 Subsim Almanac, that Neal and his crew at Subsim are responsible for, and it has me in a nautical frame of mind. Neal sent it to me for a review some weeks ago, and it has taken me till now to get time from several ongoing real-life problems at work and in my personal life to sit down and escape with this wonderful book. I’m pleased to add it to our library of recommended titles.

Subsim.com is one of the wonderful world of simulation web sites out there. Like SimHQ, it is run and supported by you, the simulation hobbyist. Unlike our site, Neal and his gang are focused on one kind of warfare: submarine warfare. Subsim focuses on naval combat, both in the real world and in simulation games. It is a center for modifications to games. Neal and his crew are a great bunch of guys, so when Neal asked me to take a look at their 2007 AlmanacI jumped at the chance.

If you go here, you can see the work in all its 380 page glory. This is a professionally-produced paperback, with a foreword composed by well-known military fiction author Joe Buff. The idea for the Almanac began in 2005, when Neal, who is the “guod” of Subsim.com, started thinking about the changes in the Internet, military gaming communities, and the simulation fan base since the mid-1990s. Subsim.com started about the same time as the predecessor to SimHQ, in January 1997. Neal’s vision was a printed book, to honor the contributions of the Subsim family to their hobby. Like air combat sim fans, theirs is a diverse, devoted, hardcore and occasionally raucous group. They write game reviews, build mods, and write some of the best military fiction on the Internet. Like our own SimHQ, Subsim is a vibrant community of enthusiasts, and the Almanac is a tribute to that community.

Celebrating Subsim’s 10th anniversary, the book comprises twenty-seven different articles. Two of them are by women, Laura Sands and Valerie Stevens. That I found surprising. In military aviation, we have women pioneers to look to; women like the American WASPs such as Jackie Cochran and Nancy Love, Russian air aces Lidiia Litvyak and Ekaterina Budanova, and modern combat pilots like Aster Tolossa of the Ethiopian air force, who shot down a MiG-29 in air combat in the late 1990s, along with the women who fly today in air forces all over the world. To my knowledge, however, no woman has ever served on a submarine, yet women are writing for Neal’s annual, and have been warmly welcomed into the Subsim community.

Inside the book, you will find that the articles range from fun fan-fiction to rather serious naval research articles. Several real-life veterans of the submarine services in the U.S. Navy throughout the Cold War era make appearances to render anecdotes from their underwater careers. The stories Just Another Cargo Ship by Mariano Sciaroni, Blood and Honor by Gerard Cuomo, and The Lucky Lighter by Jason Lobo are excellently-rendered military fiction, much along the lines of my own “Sacha Andreeva” series that I’ve enjoyed writing for you all here. Bill Nichols’s article Back to the Future is a serious, well-researched look at the American submarine force and its post-World War II changes, as well as its future prospects. It in particular, along with items such as Dr. Donald Ross’s essays Experiences of a Civilian Submariner and Submarine Silencer,Dr. Maurer Maurer and Lawrence Paszek’s study of Doenitz’s 1942 “Laconia Order” not to assist sinking survivors, and Captain Ernest “Zeke” Zellmer’s article Cavalla Makes its Mark in Naval History are articles I would expect to see presented at the U.S. Naval War College, or featured in journals published for students at Annapolis.

I was struck by the professionalism of many of Neal’s chosen authors. Many of these people are either active or retired sailors or U.S. Department of Defense civilians. The historical articles are without exception written by people with credentials, doctoral degrees, masters-level degrees, or people with first-hand experience of their subject. I’d expect to see that sort of thing in a collegiate textbook, not gracing the pages of a fan-produced book. D. Swetnam’s article The Flanders U-Boat Flotilla 1915-1918 is a piece that I will refer to often in future, because I have a great interest in the navies of World War I. It has information on German coastal U-Boats of that era that I’ve never seen before, and I have a fairly extensive collection of books on that period of history. I was greatly pleased to see David Millichope, a noted current-day authority on dreadnought battleships, contribute an article on what is my favorite naval topic. That one is an excellent overview of the era of the greatest steel fighting machine, complete with paintings by Millichope based on photos from British military archives! That alone, is, to me, worth the $19.95 price of admission. I’d have bought this if it were on sale at Amazon or Barnes & Noble just for that article, or for Theodore Savas’s recollections of German admiral Erich Topp, who he knew and spoke with on several occasions before Topp’s death.

And don’t forget the games! The executive producers of Ubisoft’s Silent Hunter III, Florin Boitor, and Tesseractions Games’s Enigma: Rising Tide, Kelly Asay,make an appearance to talk about the genesis and development of some of the most celebrated of modern naval war simulations. Neal contributes reminisces of play-testing the alpha of Silent Hunter II. Brian Danielson puts in a history of submarine simulations. Clifford Hurgin, Jr. details his experiences in his ultra-hardcore-simmer attempt to recreate a U-boat patrol from World War II, by playing around the clock. And sim fans contribute art and their own reminisces both of the Subsim web site and of playing the games.

I hate to come off like a community cheerleader. Regardless, I’ve got to jump and squeal over this labor of love. From every page, you can feel that love that these men and women have for their hobby, the naval service, and its history. I recommend it highly to those of you who have any interest at all in naval wargaming, naval history, or wargaming communities. Neal has managed to capture on print what we’ve all often come to take for granted at web sites like SimHQ, at Subsim and other sim sites — the community is what we make it. The 2007 Subsim Almanac shows us at our very best. It’s an enjoyable read, all the way around.