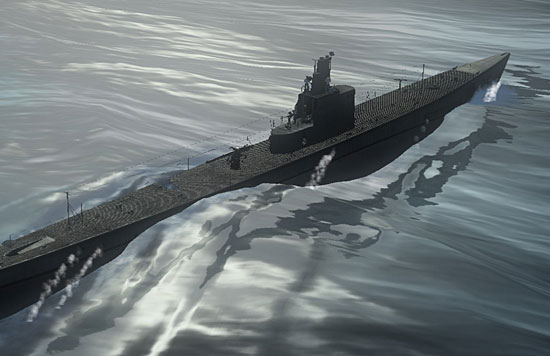 To set the stage for Silent Hunter: Wolves of the Pacific imagine yourself on your first Wartime Patrol in the Pacific in your brand new Gato-Class sub which was just commissioned. You are sailing along on the surface at a brisk 10 knots, recharging your batteries, when your radar officer advises you that he has a medium contact at 110 degrees. You order your ship towards the area of the contact to check it out. Lookouts advise you that they see trace amounts of smoke, which is emanating from the stacks of what looks like two large freighters, along with one oil tanker. They also report two leading destroyer escorts, one on each side of the convoy, and they also state that the flag being flown by the escorts are that of none other than of the Japanese Imperial Fleet. Knowing you are in for a challenge, you order battle stations, and you submerge your submarine to a depth of 55 feet. Coming closer and closer to the ships and also keeping a watchful eye on the two destroyers, you work out a firing solution for the two large freighters, knowing that you will only have time for an attack on two of the three ships. You fire two torpedoes at each ship and afterwards accomplish a course steep correction, make your depth 150 feet, and soon you hear the impact of your weapons. Then you hear a sound that you did not want to hear, the sounds of depth charges hitting the water, and soon your sub is gyrating from the explosions nearby. You make another course correction, and your sonar officer reports contacts moving off. You order your depth to 55 feet, and order “up periscope” to view the damage. Your eyes are amazed when you see two burning and sinking freighters behind you, and the report shows two “Nagara Maru Class” freighters destroyed in your ships log.

Well, that is almost what you can almost expect from this World War II naval submarine simulation. In this fourth installment in the series, Silent Hunter: Wolves of the Pacific takes players to the depths of the Pacific Ocean as the skipper of an American submarine. Immersed in this intense environment, players engage in massive battles with enemy units, manage and evolve an entire submarine crew, and earn promotions and commendations to guarantee victory in the Pacific.

Well that little synopsis is better written than what you can actually obtain concerning the game. Since I am somewhat of a Silent Hunter fan, I was very enthusiastic in being able to perform this PC review in that I have read most every article, preview, forum post, and watched all of the video trailers for this game. I have also, against my own rules, read a couple of other game reviews that have been published recently on Silent Hunter: Wolves of the Pacific. Those full reviews gave it somewhat high marks, and it appeared to me that it would be an excellent and a very rewarding follow-up to the third version of the series, the highly successful Silent Hunter III. It did turn out very rewarding in the eye candy department, in spite of the game having some bugs and graphical anomalies. That doesn’t necessarily make it a bad game to play, just a little more work to fully enjoy.

Typically SimHQ does not review “patched” games, however since the first patch, version 1.1, was released on the exact date that the game was available worldwide, we are making an exception and running this version for the review.

Here are my results from my experiences with Silent Hunter: Wolves of the Pacific v1.1. 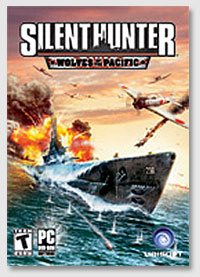 Packaging and the Manual

As of this writing, Ubisoft has released 2 different retail versions of the game, the “basic” package and the “Collector’s Edition”. The later is a real “supreme” high-priced release in that it contains the Silent Hunter 4 game DVD with a 100-page manual, poster, quick reference card, special metal box with specific artwork, a full ship recognition manual, a bonus DVD “Making of Silent Hunter 4”, a special ballpoint pen, the quick-reference keyboard chart, and an arm patch. The “basic” package contains the game’s DVD, a robust 100-page manual, an enhanced ships recognition chart, a historic map of the Pacific Theater, Bonus DVD, and a quick-reference keyboard chart. The one I received for this review is the aforementioned “basic” package.

All I can say is, I hope more players had a better experience with the installation process than I did.

Upon my installation, I was met with five options to install: Silent Hunter 4, DirectX9c, Gameshadow, Adobe Acrobat Reader 6, and Windows Media 9 codec’s. Since I thought the latest version of DX9c was on my system, having just updated it recently for another game, Adobe Reader 7 was already installed and I did not want Gameshadow, I only selected the game itself and the codec’s. After installation, I was met with a couple of “error messages” concerning DX9c and Adobe Acrobat Reader. Even after “repairing” it, the game would not play. So I accomplished a un-install and re-install and this time leaving ALL five checked, and afterwards everything worked fine. Go figure.