Of course when you want to go play with some of your friends in either co-op or adversarial naval combat, you will need to have either a LAN setup or broadband Internet connection that includes an active account with Ubisoft’s own online multiplayer connection site, “Ubi.com”. If you do not currently have an account it is easy to obtain one and you do not have to leave the game itself. I connected via a pop-up box that appears if you select “Create Profile”. The account server will be opened where you accomplish the registration process. After registration, you next place your account name, password, and your CD Key into the block provided and select “login”. They’ve made it a very quick and painless operation.

Unless I have been trying at the wrong times during the day, I have only came across maybe one multiplayer server up and running at the times I want to test the online gameplay. I have been able to play on a couple of “home” co-op servers and on both of them the missions were very linear. They were the basic attack and destroy ships in a convoy. What really opened my eyes was that the cruisers or the destroyers did not respond to us destroying their freighters, oil tankers, along with those same cruisers and the aircraft carriers. Not a single one of the destroyers came in our direction to challenge us. It was like they could not see us, and I know that was not true, because the other player I was with was running on the surface utilizing his deck gun. Because of this experience, I have serious reservations concerning the cooperative style of play and the enemy AI. 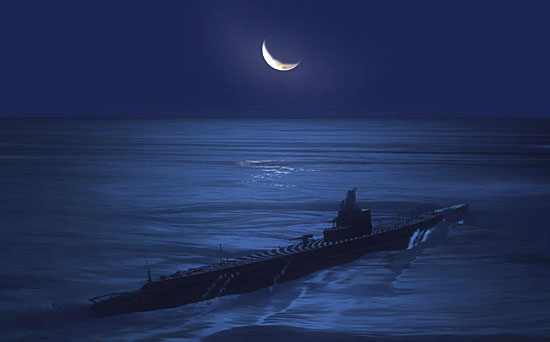 While this game has merit as a realistic WWII submarine simulation, this naval warfare reviewer was somewhat saddened in the patched released product. I expected a purely realistic submarine simulation, and while this game came rather close to being that, there were still a few things that were far too exaggerated or were just “not there”. There is some definite good, if not truly outstanding, things in this simulation. The graphics quality, along with the sound and musical score, are terrific. If the boat rises to the surface, one can look out to the horizon and see the setting sun and watch realistic-appearing water that seems to move with the boat. The combat sequences are very well done with beautifully rendered vessels showing stunning explosions and some colossal water effects that are second to none. With all of this technical expertise put into this game by a developer that is known for its pure realism, it is quite surprising that all of this work does not translate into a more perfect gaming experience. Silent Hunter: Wolves of the Pacific is game for the tolerant. The product is a bit buggy and problematic at times. We can all hope it will be fixed very soon in upcoming patch releases. But for now I must conclude they did put forth an enjoyable game that met some of my expectations.

Check out our Naval Combat Zone Library!
SimHQ earns referral fees on sales of books, electronics, and more at Amazon.com.