Well, what else can I say about Jutland? I can probably say that this is probably the longest review that Storm Eagle Studios will get for its game.

The three things I think are the best parts of this game has to be the campaign setup, the support from SES and impressive attention to detail that the developers put into the creation of this game. Realize that data on WW2 ships is very easy to find, but data on some of these old WWI and often forgotten ships can be like pulling teeth. Everyone knows what a Fletcher Class destroyer looks like and there are enough references out there that creating a ship is not only possible but relatively easy. Creating a C class British Destroyer (built at the turn of the century) requires a lot more work. Just like Distant Guns, this game requires some homework by the developers, and they certainly did it. 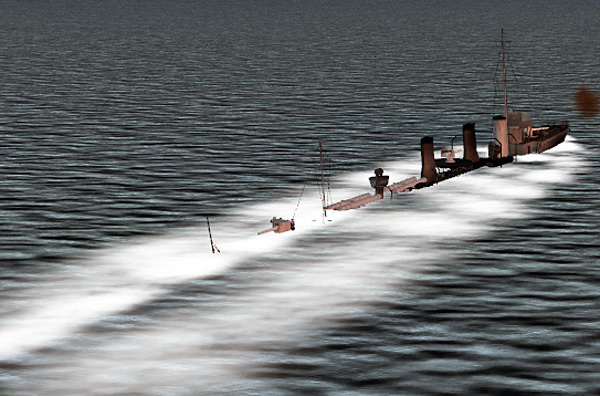 What don’t I like? Well, the software check system can be a royal pain in the ass. I lost a week of review time when I changed out computers because I thought I sent the data back to the server when I actually didn’t. It took me actually resetting up my old box to get back into the game. That is part of the reason it has taken a while to get this review out. There are some campaign complaints, especially with battle resolution that I think need ironed out. And I really would like the ability to lay smoke screens. At the same time, I realize this is a small, energetic company comprised of a couple of gentlemen and some others folks helping out. This means some of the “big company” polish may not be on the game, but when you consider what the Rose and Koger team had to accomplish, it is amazingly well put together. Only guys dedicated to the recreation of the past could make a game like this.

Still, at least for me none of these are the kinds of major deal breakers that would keep me from purchasing Jutland. Yes, I would like a box on my wall but as long as I have the ability to restart the game over time I can deal with downloading the game again. I have no qualms at all about highly recommending this game. It is, at least to me, one of the best naval wargames made. I am planning on getting another laptop later this summer, I will be purchasing a copy to put on it (even though the copy protection routine keeps me from purchasing it for my current laptop).

Judging from some of the things that I found wrong with the game you might think that Jutland had a lot wrong with it. Unfortunately that is what a reviewer, in my opinion, is supposed to do. It is my job to point out things that may bug me about the game. In all honesty, there is little I truly have to complain about with the game.

In reality the game is highly polished and only has a couple of what I call weak points to it. Overall the game is outstanding and the entire series that the SES team is putting together could turn into another classic of wargaming similar to the Battleground series or the Great Naval Battles series of prior days. The game is highly entertaining, well made and there is enough stuff here to keep people entertained for a long time. I didn’t even discuss the multiplayer aspects of the game (hadn’t tried it, but it is there). I have played many games out there, few are better and most are a lot worse. I have found few people who have bought the game have found their money wasted.

I look forward to SES’s next installment in the series. I assume they are going to approach the Second World War with their next installment, or something along the lines of a 1920s or 1930s version of events. I honestly don’t know. Hunting the Bismarck might be fun but seeing what the Arizona could do against the Haruna might be fun too. Whatever they make I will certainly look forward to it.

Jutland Page 6
Over Flanders Fields Phase 3: Between Heaven and Hell

Russian aviation ammeter from the aircraft. Trophy. War in Ukraine 2022.