The series has come a long way from 1996 when the first version of the venerable title was released by SSI. Over the years the game has gone from the Pacific Theatre of operation to the Atlantic and back again to the Pacific. For SH5 the Ubisoft Romania development team has decided to fight it out in the Atlantic and Mediterranean theatre.

The hallmark of all Silent Hunter games released by the Ubisoft Romania has been great games hampered by some really weird and sometimes inexcusable bugs. Silent Hunter III was a diamond in some real rough and took several patches and mods by gamers to reach its full potential. Silent Hunter 4 was a bit less buggy, although it still had some crazy things wrong with it. Again, it took a total of five patches (if you include the U-boat missions pack that essentially included the final v1.5 patch for the game) to bring the game up to full potential. The good news is, they did finally meet their full potential and have remained favorites. 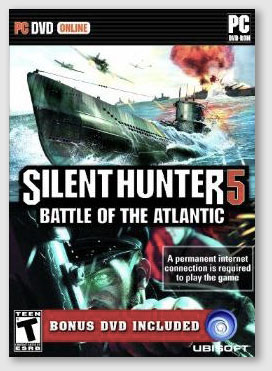 I am not going to delve into detail within this review about it. Rather, I would stronglyencourage you to read my companion piece to this review which specifically addresses the topic of Ubisoft’s Uplay. The commentary sums up my current opinion on the topic.

The game installed without an issue. The DVD case is fairly stingy, with no real manual or keycard. The manual that comes on the DVD is ok for showing the bare nuts and bolts of the game but at 35 pages, it is very hard to learn more than the bare basics of this game. By comparison the manual for Silent Hunter 4 was over 100 pages and felt much more substantial. Ubisoft has recently stated that they are no longer putting paper manuals with their games to increase their “green” factor. Personally I think their reason is for green reasons, but that green has nothing to do with saving the environment.

A plus is that the game includes a pretty interesting documentary on the loss and later rediscovery of the USS Lagarto, a Gato class submarine sunk during WWII. It is a nice little documentary on the ship, its loss, and the effort to find and honor the sailors killed during her last voyage.

Graphically, this game is as good as it gets. Just as Silent Hunter III revolutionized the look of seagoing warfare, Silent Hunter 5continues to raise the bar. Modders have done a wonderful job of turning SHIII and SH4 from very sharp looking games to graphical masterpieces. SH5 looks better out-of-the-box. Given the love affair modders have for this game, it is just a matter of time before they turn this outstanding looking game into an even better looking one.

Wave effects are beautiful and appear nearly photo realistic. It is almost possible to become virtually sea sick. The boat rocks and rolls, the waves roll over the ship and the white caps look authentic. What is even more amazing is that it hasn’t been that long since water effects were fairly bland. Water is notoriously difficult to model, and the entire technology has progressed dramatically in just a very few years.

Ships are rendered in even more detail compared to forerunners Silent Hunter III and Silent Hunter 4. Details are even more intricate with much more detailed warships and merchants. Interiors of your submarine needed to be rendered much more closely and in SH5,they are. I have never been in a Type VII but I did get the opportunity to squeeze myself into a Type IX (U-505) and it looks very familiar. While the interiors feel cramped, to me they don’t feel as claustrophobic as I remember them in the U-505. Maybe it was just me. Type VIIs were very small boats compared to the Type IX or the U.S. Fleet submarines, but they were effective at their job.

I did find a few graphical anomalies from time-to-time, but in general they were minor. Some clipping issues were found, especially when I would walk next to a sailor inside the ship. At times waves would ride over the boat in some odd manner but that also was a minor complaint. One problem is the spawning of ships in port. I have seen ships spawn in seawalls and on top of other ships. One freighter spawned right on top of my submarine while I was trying to transit the Kiel Canal, sinking me and thoroughly ticking me off. Other anomalies include sailors on torpedoes ships walking directly into and out of raging fires.

Special effect explosions are beautiful if a little “Hollywood-ish”. It seems every cargo ship in the game is carrying high detonation explosives. Yeah, it is nice seeing things go “boom!”, but if you look at old videos of merchant ship being sunk by a U-boat, few of them exploded into complete fireballs when hit by a torpedo or nailed with a deck gun. But lets face it — flashy graphics sell and some people would probably be be turned off by a milder but more “realistic” effect. I am sure some enterprising SH5 modder will be all over it anyway soon.

To me, sounds are not much different than SH5’s predecessor SH4. Engine sounds, crew interactions, sounds outside the ship, explosions and so forth are serviceable but not outstanding. This isn’t saying anything really bad sounds don’t necessarily have to be as realistic and visceral as a first person shooter, so they do what they need to do — add to the ambiance without standing out prominently in the game.

One thing of significance to note is the voice options in the game. You can select from either German or English (with the English version of the game), and with or without English sub titles. The English voices in the game are done with a slightly cheesy German accent which is mildly amusing and not too distracting. But I have found some people in forums that are much stronger in their opinion and simply do not like it one bit.

A SimHQ “Got Game?” Review
Silent Hunter 5: Battle of the Atlantic Version 1.1 Page 2