One of the major changes involves the hex size of the game. Originally the game was represented by 60 KM per hex size. The new game allows for 40 KM per hex, an almost one-third increase in overall size of the entire map. What this means is that there is room for new bases, ports, and roads. It also means more room to maneuver for the land units. Some of the old tactics for stopping the enemy don’t work now simply because units can maneuver over different areas and old choke points don’t really exist anymore.

The naval system has been totally reworked as well, mostly for the good. In the past it was possible to run carrier and surface battle groups all over the place, resupply them at very small port hexes to continue the fight. Well that isn’t nearly as easy now. Port size has a large bearing on whether carriers can resupply torpedoes or at all and BBs can find themselves unable to resupply heavy gun ordinance because a port is too small to get them the big gun ammo. Ports that are too small cannot conduct the refueling needed to continue the battle.

Port size also affects what you can do a lot more than it used to. In the past there was pretty much limited stacking as far as units went on islands. Now islands are classified by size and that size limits the amount of troops that can be garrisoned there. Atolls cannot have twenty five thousand troops on them anymore, at least not without serious penalties in supplies. 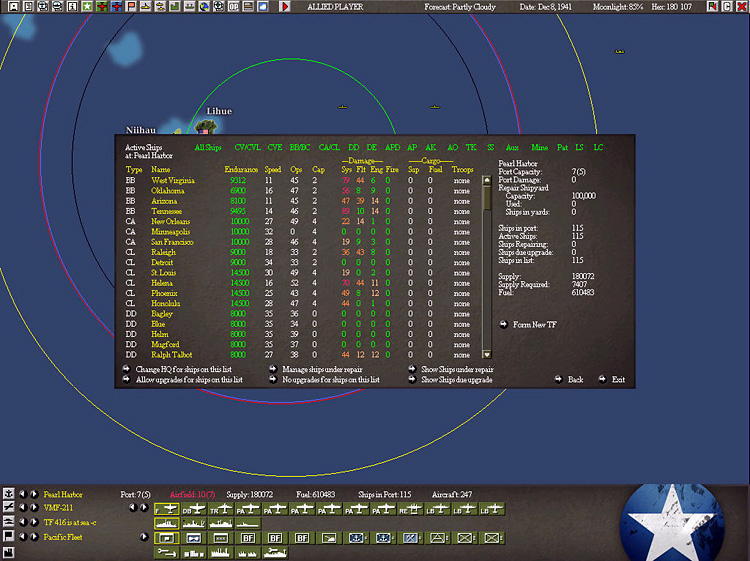 Ships in Port – War in the Pacific: Admiral’s Edition

Likewise stacking limits create difficulties in grouping bombers. You can put hundreds of four-engine bombers on smaller islands with smaller airfields but you will suffer a more substantial penalty in unit cohesion and ability to field bomber attacks by doing so.

This has created some controversies. Islands like Tinian, Siapan and Guam were used by hundreds of B-29s in the war but due to the stacking limits the game you cannot mount some of the huge raids that were common in 1945. This isn’t possible in the way it really happened. Due to the island size issue with Guam and Tinian these large raids are limited and if you put the historic numbers of planes on the islands you will find that you suffer some serious penalties.

By the time the war was over Tinian was basically nothing more than a huge aircraft island and Guam wasn’t a whole lot more. B-29s are big and should require a lot of support and supplies to keep running but the allies should be able to mount raids on Japan that are historically correct. As it sits now, Guam and Tinian are less significant than taking the Philippines, which has the bases and the ability to field these aircraft. This may have been corrected in a patch and the game does come with an editor so you can turn Guam and Tinian into size 9 airfields, but I wish it would have come out of the box like this.

Mid ship intercepts and combat has been reworked. Ships will actually pursue enemy ships into another hex if there is enough movement points available. Air combat is more realistic although some things need to be worked out better. For example, torpedo bombers tend to do a better job dropping bombs than they do hitting ships with torps. In fact, Kates seem to have modern laser-guided munitions when dropping from altitude. The game has been patched and the aircraft aren’t quite so adept at level bombing a ship going at full speed in the middle of the ocean. But in my opinion it still is too accurate. Glide bombing by F16s is hard enough with all that computer aided stuff that they have. In WiTP:AE sometimes it is better to have your torpedo planes drop bombs on transports than it is torpedoes.

There is a new setup as far as resupply and reinforcement is concerned. In the past most supplies and equipment (for the Allies) generally arrived at Karachi and San Francisco. Not all but probably 90% of your troops arrived at these two places. AE (the new nick-name for the game) adds both the ports in Africa and the Middle east as well as the Panama Canal and East coast areas. A lot of equipment arrives there and has to be shipped cross country to the areas that are needed. 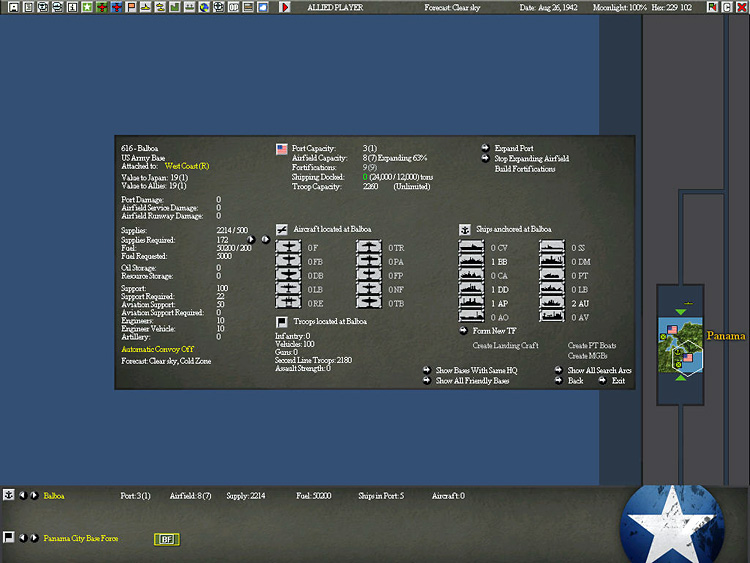 The Panama Canal – War in the Pacific: Admiral’s Edition

Additional ships and classes have been added. Most of the original ships are in the game and different ship classes have been added to create a more accurate representation of the actual ships and their purposes in the war. Patrol boats, frigates, miscellaneous patrols and other smaller craft are now part of the game. In addition, cargo carrying ships are better represented. Speeds and sizes were fairly generalized in War in the Pacific and are much more ship specific in Admiral’s Edition. 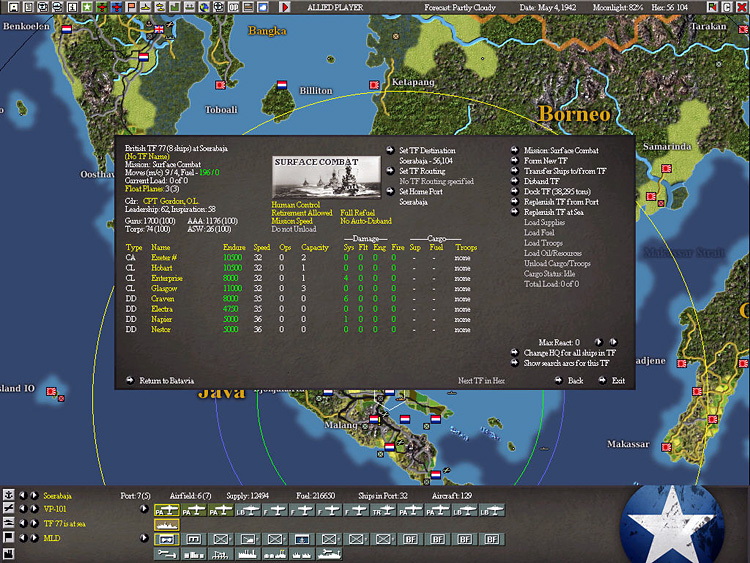 One of the most significant changes in the game involves the extra ports and the ability to move off-map in the game. Previously, Allied ships would appear on the map in places like the West Coast of the U.S. or Karachi in the East. Likewise, supplies would often magically appear in Karachi and San Francisco. WiTP:AE has added areas like the Panama Canal Zone, the East Coast and even England to the mix. Ships can transit from the East Coast to the Pacific and likewise ships can be brought back to the East Coast for definitive repairs and updates (for example, think about the USS Franklin after her Kamikaze attack in 1945).

Troops don’t automatically load onto ships either. In WiTP troops would simply load onto ships but with the Admiral’s Edition loading may or may not work as easily. Troops can still be loaded quickly with the amphibious operation tab, but troops come off ships more slowly and will have a higher level of disruption. Likewise some equipment may not be unloaded over beachheads. The other option is to load troops strategically and move them to your destination. You can’t assault islands in this manner and troops aren’t immediately available for combat operations, but they are loaded more quickly and are transported more quickly via rail lines this way. There is also a “move option” available for quicker movement over roads and other terrain, and the “rest option” for troops allows them to build up morale for future operations.

Air combat has changed somewhat. I mentioned earlier how the stacking limits the ability to mount sorties as well as the numbers of aircraft in each sortie. Fighter units don’t have a strict combat air patrol button anymore but have the CAP functions become part of the primary function assigned to the group. In other words, you can have a group assigned a function like escort or fighter sweep while keeping a percentage (from 1% to 100%) assigned to secondary functions like CAP or extended CAPs. Search aircraft, like PBYs can now have dual missions like ASW patrol, Naval Search and training or resting functions. Likewise search arcs are now available. This means limited assets can now be used to patrol areas you think are at highest risk of enemy advancement. 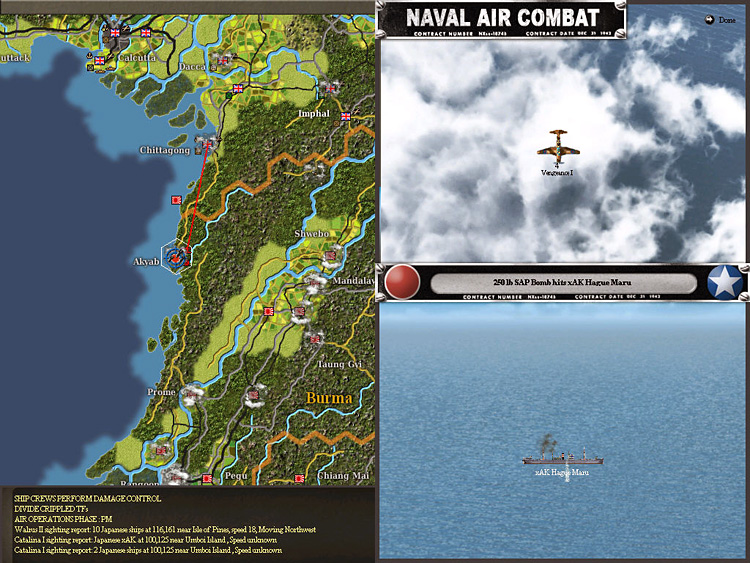 The controversial Zero bonus is gone. For those that don’t know what that is, in the first version of WiTP the A6M series of aircraft (actually all Japanese fighters if I recall) had a substantial advantage built in. This lasted until around April/May of 1942. In addition, the game pretty much has eliminated AI control over certain areas, it is all human controlled now. Waypoints have been added as well as patrol zones for ships. The list of changes is as long as my arm. These changes don’t make for a new game but for a substantially updated and improved one. It would be like comparing the first IL-2 Sturmovik release to IL-2: 1946 with the 4.10 update. Both IL-2 titles at their core are the same game, but beyond that they have changed substantially over time. WiTP:AE is essentially is the same game as WiTP, albeit one with some significant changes.

One major improvement is the ability for those of us with widescreen monitors to change the aspect ratio so it fills our monitors. The way to increase it is complicated and involves editing the properties of the game shortcut. But it works reasonably well once completed and makes the game visually more appealing. It also makes it feel more like a 2010 game and less of a 2004 game.