When you’re paying twenty-something bucks for an add-on to a game that’s been out for awhile, you expect it to be tested before release. Well, the boys at SES failed to beta-test the otherwise great scenarios they’ve shipped with the add-on. Only two, Coronel and the first Falklands scenario, are mostly un-bugged, but in the Falklands first scenario it opens with HMS Kent about to run aground in the harbor it’s trying to exit. That’s an old, old pathing issue that’s been around since Distant Guns when you’re operating near land. Still not entirely ready for prime time there. The other new missions are really bugged, and here’s how. One neat thing that SES has added in is a timer that you can set in the mission editor that simulates the time it takes for a ship to get steam up. This has actually been around sinceDistant Guns, such as the sneak attack on the Port Arthur fleet and the time it took for the Russians to get moving. Three of the add-on scenarios, the later two involving various points in the Falklands battle, and Isla Guafo, the one simulating what could have happened if Cradock had taken the elderly Canopus to the west coast, are nailed with a bug from this ability. Ships that should be on the move are grounded, for 25 minutes to an hour. This is particularly annoying in the last Falklands scenario, where the battlecruisers are supposed to be exiting the harbor at 15 knots with a bone in their teeth. See this screenie? 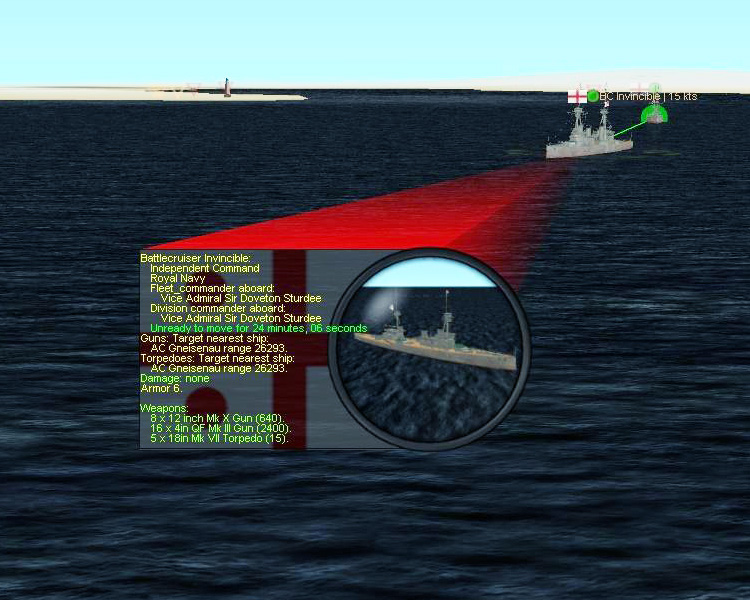 Yeah, that’s HMS Invincible, stuck in the harbor even though the game thinks she’s doing 15 knots, as the Germans run for the hills. This one’s unplayable. The other one is the Isla Guafo scenario, the otherwise-fun one where you have the battleship strolling along while you try to bring the Germans down long enough for those 12-inch monsters to get in range. You’ve got a light cruiser supposedly on your right flank. And it’s bugged and stopped for 20 minutes while a German 105-mm cruiser descends on it from the north. By the time it gets into the game, the game’s gone way north. And these bugs have been reported since release… with no fix on the horizon yet. Not good, SES. We can do better than this.

On the forums at SES, there are some AI issues being reported also, and I’ve seen some of them. I think they may have something to do with the psychology issues. I inserted the cruiser Defence into the Coronel scenario and let the computer fight itself. Monmouth closed in first and after a 20-minute gunfight, was pounded bad enough that flooding got out of hand and she sank. Defence and Good Hope were running together until Monmouth was put out of action, nearing the fight. But then they both suddenly turned away and ran for the hills while Monmouth was sinking! That one didn’t add up.

But it does get worse.

The ugly, other than the land itself (I get that this is a sea battle simulator, but really, the Falklands don’t look like a desert, guys), is the interface that you have to fight with just to buy the darn game and run it in the first place. This is “Stormpowered,” a prenatal version of Steam, with a lot of the same or similar features, and like the bugged scenarios in Jutland, Stormpowered appears still to be in beta. When I bought the Map Pack 1, it had been awhile since I had played the game. I was able to get signed into the Stormpowered client. I went into the Store. I tried to buy the game. And the Store claimed that I had no account. Even though I was already signed in. It demanded that I create an account. So I did. And bought the add on. Which did not show up in the list of games I had already purchased via Stormpowered. I signed off Stormpowered and tried to sign back on. And Stormpowered claimed that it did not recognize my password or my email address. So I uninstalled and reinstalled. This time it recognized my email address, but not my password. After messing with it for awhile, I was able to sign in with my OLD password. And the add on still wasn’t showing up in my list of games.

I opened up two tickets in their tech-support system. Which you need to know your multi-digit customer ID to sign into. To get into the Stormpowered client, you only need your email address. To open a tech support ticket, though, you need that number and if you didn’t print out a receipt from your game, you’ve not got that. Fortunately, I kept my receipts from the last time I had to fight with Stormpowered to get into Distant Guns, when Stormpowered was brand new on the scene and they were converting legacy DG players like me to Stormpowered, back in 2010. My two tickets were one for the Stormpowered store issue, and one for the issue with the add on not appearing in the mist of games. It’s a Saturday. And I learned that SES has no tech support on Saturdays… the busiest time for gamers….

On Monday, SES’s tech folks got right on it and fixed the issue right away. And in the process, they, in a “you-idiot” tone, informed me in the ticket that I (1) shouldn’t open more than one ticket at a time, and (2) that I’d created two accounts, which I shouldn’t have done. Which I would not have done, had the Store not required me to. Let’s just say that I find SES’s customer service a mixed bag. It’s fast and really efficient… Monday through Friday… but their people-skills aren’t the greatest.

As for Stormpowered… clearly, it’s a work-in-progress. Still. Your mileage may vary.

Is Map Pack 1 worth the Stormpowered hassles and customer service issues? Overall, yes. I did get my issues sorted in a reasonable amount of time, and the game is playable and fun. Frankly, it’s the only thing in the market that is quite like it, and if you have an interest in naval warfare in this period, it really is worth hassling through the bugs.