We mentioned that pricing would be discussed, and viola! We have it right here and you can see that AMD is very proud of the 3000+ Barton core. 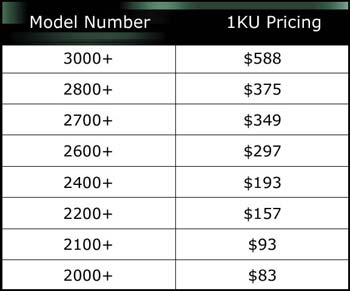 We were glad to see AMD move forward with such strength! The new 512K cache “Barton” performed flawlessly and with power. Since AMD is using performance ratings, the increase in cache translates to an increase in performance which, in turn, means a new performance rating all the while keeping the MHz down which means increased yields and higher margins.

It is nice to see that AMD is not only staying in the game with Intel but also bringing the fight to them. 640K of L1 and L2 combined cache is the most cache ever released in a desktop processor! This Barton core makes this AMD Athlon XP the fastest performer we have ever seen. Strangely, our 3DMark 2001SE numbers seemed sluggish when compared to our previous 2700+ processor but this is likely related to driver issues with our new nForce2 board.

AMD continues to be the best bang/buck for processors but Intel still has their secret “Hyper-threading” advantage. Without question, AMD has the most powerful 2+GHz CPU ever created even when comparing Intel’s 2.8GHz CPU directly.

The compatibility, consistency with sockets sizes and numerous motherboard chip choices, will keep AMD as a very popular choice with consumers. Computer enthusiasts are especially enamored with AMD. AMD’s success lies in getting more OEM business. It starts at the enthusiast level and builds from there. AMD is winning over more people each day and Mr. Barton will only make their successes more numerous.