The 925X and 915 chipsets represent an abrupt move away from the Socket 478 platform by introducing a new format, LGA775 or Socket T. Intel suggests that this new packaging increases power and signal delivery, and will thereby give needed headroom as CPUs continue their inexorable clock speed increases. Besides the pin count increase, the most interesting aspect of this new socket is the fact that the pins themselves have been moved from the processor to the socket itself; LGA (Land Grid Array) refers to the flat contacts on the processor. 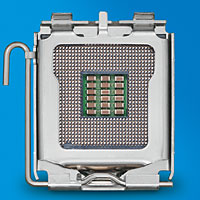 While the increased pin density will provide superior power and signaling, the potential disadvantages are added costs handed down to motherboard manufacturers, who operate within very thin margins for profitability, and possible user woes if a CPU install goes awry.

Alongside the Socket T format, Intel is also introducing a new line of Pentium 4 processors. Based on the core code-named Prescott, these CPUs comprise Intel’s new 5xx series for Socket T platforms. The flagship model is the Pentium 4 Processor 560, a 3.6 GHz CPU, with the 550, 540, 530, and 520 models following suit at 3.4 GHz, 3.2 GHz, 3.0 GHz, and 2.8 GHz, respectively. These CPUs boast a 800 MHz FSB, 1 MB of L2 cache, and SSE3 support, and are manufactured on a 90nm process. The Pentium Extreme Edition 3.4 GHz also included in this review is likewise based on the Prescott core and includes 512 KB of L2 cache, with an additional 2 MB L3 cache.

Interestingly enough, the 5xx series of processors represents another dramatic shift from historical patterns, in that new fabrication processes have traditionally resulted in lowered power consumption and thus less heat. Yet a Prescott CPU consumes roughly 25% more power than its Northwood (130nm process) equivalent. While it is thoroughly reasonable to expect improvements to be made to the manufacturing process Intel employs, this is nevertheless a noteworthy shift away from existing patterns, one that the company itself is well aware of and perhaps seeks to allay the potential negative sales impact of by introducing so rich a feature-set in their 9xx chipsets. Indeed, the adoption of the new naming scheme could itself be an indication that Intel would now like to emphasize clock speeds as a key marketing point less than it previously has in the past. 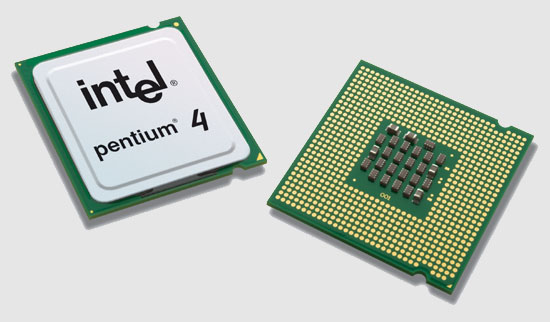 The benchmark suite that will be used to evaluate this test system is listed here. Again, unless specified otherwise all games are configured to their highest settings, and 32-bit color and trilinear texture filtering are the default baseline during testing. Also, Windows XP Professional is configured to have Automatic Update, System Restore, and all unnecessary startup services disabled. Fraps v2.2.1 is used to record performance scores unless otherwise noted.

The GeForce 6800 GT is a PCI Express board clocked at 350 MHz with 256 MB of 500 MHz GDDR3 memory. The 61.45s were used and manually configured for high quality settings, with trilinear filtering optimizations disabled.