NVIDIA’s mantra last year for their GeForce FX chips was the depth of their GPUs’ pipelines, eschewing a wide architecture for a narrow (think four pixel pipelines) yet deep one. With the announcement of the NV40 architecture this spring, NVIDIA revealed a dramatic change in its approach with the GeForce 6800 series, new GPUs that boast up to four times the number of pixel pipelines as their predecessors. In addition to this wider architecture, NV40 also incorporates hardware support for such cutting-edge features as DirectX 9.0c’s Shader Model 3.0 and floating point blending. NVIDIA traveled a somewhat rocky road last year, so has this design change paid off for them? In a word: yes. The high-end chip of the new GeForce 6 series, the 6800 Ultra, is roughly twice as fast as the company’s best GPU from last year, bringing NVIDIA back to a very strong position with the market from both a performance and technology perspective. 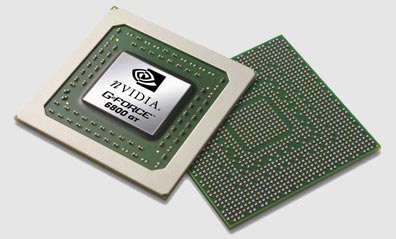 The GeForce 6 series is comprised of three models: the 6800 Ultra, the 6800 GT, and the vanilla 6800. The flagship product, the GeForce 6800 Ultra, has a core clock speed of 400 MHz and 550 MHz GDDR3 memory, and a suggested price of $500. The Ultra is a dual-slot board due to the size of its cooling solution, and NVIDIA recommends users to run a power supply rated at 350W or higher (particularly if overclocking) with the Ultra boards. The 6800 GT is a slower, single-slot version of its Ultra sibling, with 350/500 MHz chip and memory speeds and a more popular $400 pricing. Both the Ultra and GT models boast 16 pixel pipelines and six vertex shader units. Last, the plain 6800 model is a 12-pipe, $300 mainstream solution clocked at 325/350 MHz. Worth noting is that these are reference specifications NVIDIA provides to their AIB (add-in board) vendors, and are therefore subject to change as the vendors attempt to differentiate their products with special or unique “samples”.

The GeForce 6800 Ultra and GT, as mentioned above, are a 16×1 architecture, and such a wide, parallel design does not make for a small chip. Produced on a 130nm fabrication process, these new GPUs have an unprecedented transistor count of over 220 million. The reference board NVIDIA sent is a PCI Express solution that has a 256-bit memory interface, with dual DVI and one TV-out connectors driven by two 400 MHz DACs. Moreover, the NV40 architecture upon which the GeForce 6 series of chips is based has the richest feature-set for GPUs currently available on the market. 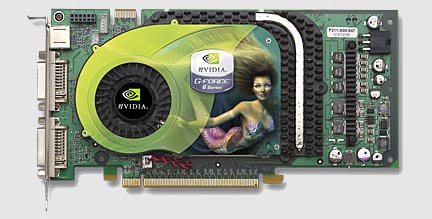 And while SimHQ is a site that focuses on simulations-based PC gaming, we would be amiss if not providing a brief look at this architecture:

Shader Model 3.0, an evolutionary step from the 2.0 model, lifts a number of restrictions within its predecessor for ease of programming while adding new features such as dynamic branching and vertex texturing, among others. And while game support for the new model (which will be exposed in DirectX 9.0c, included with SP2 for Windows XP) is, for the moment, very sparse — currently limited to Far Cry’s recent 1.2 patch, which is still not yet available — NVIDIA can certainly be expected to do their utmost to work with developers to take advantage of their new GPUs’ hardware support for the 3.0 model. In addition to SM 3.0, the 6800s’ ability to perform floating point blending allows for accumulation effects such as motion blur (reminiscent of 3dfx’s T-buffer) and soft shadows. And the 32-bit floating point precision throughout the entire pipeline, from input to the rendered output, allows for HDR (high dynamic range) effects, which can be used to create more realistic scenes by working with a superior gradient of brightness ranges. All of the above are unique to NVIDIA’s NV40 architecture, as no other GPU geared toward the mainstream or gaming markets currently available supports these features.

Naturally the above capabilities will have to be specifically incorporated into games by developers, but NVIDIA should be congratulated for being the first to bring these features to market. But the hardware support for such advanced features and a 16×1 architecture that also includes two shader units per pixel pipeline does not come for free in terms of the transistor count of the GeForce 6800s, and with over 220 million transistors even the flagship Ultra chips are clocked at speeds considerably lower than those of the previous generation. Let us take a look at how a PCIe version of the 6800 GT handles the SimHQ benchmark suite.