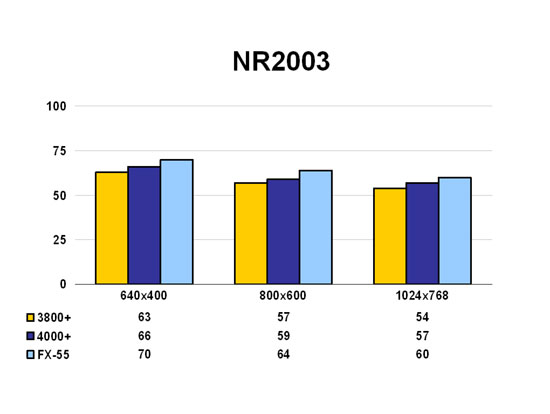 At the two lower resolutions, the FX-55 shows more improvement over the 4000+ than the latter does over the 3800+, though the difference in gains is marginal at 640×480. Like most other titles not bottlenecked by the graphics card, NASCAR displays close to 5% difference between CPUs.

SimHQ’s benchmark suite displayed a fairly uniform 5% performance gain across the board for AMD’s new processors over their slower parts, with the FX-55’s clock speed increase allowing the CPU to scale itself slightly better than the 4000+. The Athlon 64 family of processors has proven that they can dominate in a 32-bit gaming environment, though the performance they offer is certainly not as inexpensive as past Athlons have been alongside comparable Intel parts. It will be interesting to see if the migration to the 90nm process and its smaller die sizes will have any impact on Athlon 64 pricing; and with Winchester still due this year and San Diego (the 90nm FX core) sometime next, it will also be interesting to see if AMD releases any additional 130nm processors before moving the entire Athlon 64 family to the new process. And of even more excitement to hardware enthusiasts, there is of course the expectations for dual-core processors that both AMD and Intel are currently striving to bring first to the market late next year.

The MSI K8N Neo2, using the nForce 3 Ultra chipset, proved itself to be as stable as the A8V Deluxe motherboard used earlier this year. Though the unfortunate inclusion of a 9800 Pro in the test system clearly held the Athlon 64 4000+ and FX-55 from reaching higher performance levels in several of the simulations tested, the two processors only strengthen AMD’s performance lead over the competition. And with their release, the new CPUs should help trickle the pricing on previously introduced Athlon 64s down. Yet for the simulation gaming fan who feels compelled to build the absolute fastest rig available today, they need look no further than the Athlon 64 FX-55.