NR2003 displays a difference between the two systems that consistently stays at just under 5% between the scores generated. The game’s frame rate scales fairly well as the resolution is increased, dropping down by some 20-25% on the two test systems. 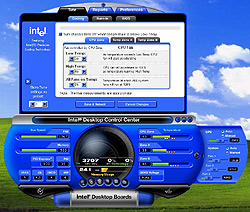 Using Intel’s Desktop Control Center utility found here to monitor processor temperature, the P4 3.46EE would idle at the Windows desktop around 49-50 degrees celcius, compared to the P4 3.4EE which idled at roughly 34 degrees. While temperatures never quite reached the point at which the onboard heat sensor would begin clocking the processor’s speeds down, after extended periods of heavy usage Intel’s utility would show the CPU spiking well into the 70s. Nevertheless, the new motherboard was as stable as the industry has come to expect from Intel chipsets, and the 925XE offers an extremely rich set of onboard features.

If the SimHQ benchmark suite is a accurate barometer by which to gauge the 925XE and its faster FSB’s potential advantage, the number five, as in 5%, springs to mind. While IL-2 and the Comanche 4 demo scores displayed strong performance benefits, the rest of the suite demonstrated far lower gains, averaging either around 5% faster than the original 925X chipset or slightly less. If this pattern stays consistent for other genres of gaming software, Intel’s 925XE chipset will be unable to shift the performance lead back to the company’s corner in the eyes of the PC gaming community. Intel clearly needs a return to the halcyon days of when cranking their processors’ clock speed up would allow the company’s parts to dominate the market; yet with the recently announced shift away from this approach to one of relying upon larger caches and faster bus speeds one has to wonder if the current Extreme Editions will remain branded as such in 2005.