CH Products has added an interesting new unit to their list of legendary game controllers. The CH Throttle Quadrant USB. It’s definitely a unique and interesting piece of equipment, but to be totally honest my first impression was somewhat less than enthusiastic. It appears to be typical CH Hardware… well engineered and manufactured, but my initial feeling was that it’s something only useful to the ‘Civilian Aviation and Virtual Airlines’ gaming crowd. ‘Everybody’ knows the real fun is in the air combat sims! After all, I make my living flying Jumbo Jets, That’s work! I only do it for the money! (Big Lie! It’s the SECOND best job in the world). This new CH controller has six funny levers on it… who the heck needs more than one throttle (Well… Maybe TWO, if you are an F-4, F-14, F-15, F-18 or P-38 JOCK!). Worse yet, it’s not a ‘real’ HOTAS! There aren’t any four/eight way hats, rotaries, or buttons on ANY of throttle levers! The ONLY switches, actually buttons, are on the front of the quadrant! How could this thing possibly be of any real use to the dedicated virtual combat pilot?

I’ll bet you think I don’t care for the CH TQ… Nothing could be farther from the truth. Lets see why…

Utilitarian is the best word to describe the contents of the box… in it I found the CH TQ unit, screw-on desk mounts, and a set of extra throttle lever knobs. There are a total of four black ‘Throttle’ knobs, two blue ‘Prop’ knobs, and two red ‘Mixture’ knobs. Noticeably missing are a complex printed manual and driver/installation CD. I strongly agree with the decision 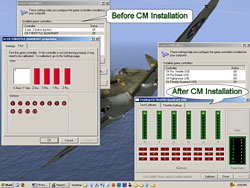 NOT in include these last two items. Every time I purchase just about ANY PC hardware, gaming or not, the included drivers tend to be woefully out of date and the printed manuals inadequate. I always end up on the manufactures web site downloading current ones. Why waste the time and cost to include them?

The TQ’s setup in Windows XP was painless… Plug it in and XP recognizes it as a ‘CH Throttle Quadrant’, a six-axis, 12-button controller. Separate drivers are not really necessary to use the TQ as a basic throttle controller. Be advised that I only tested the CH TQ in Windows XP. I no longer have any of my machines running Windows 98SE, so I am not sure if the TQ would behave as well in that legacy OS. This basic six-axis controller mode is really an easy way to use the TQ if your game allows assignment of axis and buttons organically. If your favorite game cannot accommodate that, or you want to get more creative with control assignments then you have another option. 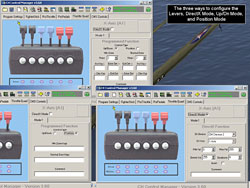 That is to download and Install CH Product’s Control Manger Software. It enables extended programmability and the ability to combine newer CH USB Controllers into a single ‘virtual’ controller. With Control Manager (CM) installed, the TQ will be recognized as a six-axis, 24 button controller. The latest version of CM is available on the CH web site.

When installing Control Manager… I HIGHLY recommend taking the time to actually READ all those little instructional pop-ups that we normally ignore during software installation. This will prevent errors in the setup of your CH USB controller and the pain of trouble-shooting driver issues later. Once CM is in and running I also recommend you do the individual controller calibration routines; I’ve found it can really make a difference in output accuracy and eliminates some potential problems. I experienced a big difference in the accuracy and reliability of the TQ’s pseudo buttons after proper calibration.