The following chart offers a quick breakdown of the processors tested in this article:

As we can see from the above specifications, the 660’s increased L2 cache has resulted in a rather significant jump in the transistor count, from the 5xx (not listed above) series’ 125 million to 169m, though EM64T support undoubtedly added to the higher number. As for the 3.73 EE, moving its 2 MB of L3 cache to just L2 and losing the older EEs’ 512 KB of L2 shows a small transistor decrease despite the additional features supported.

The Comanche 4 benchmarking demo was run with texture compression and hardware shaders enabled and sound disabled. 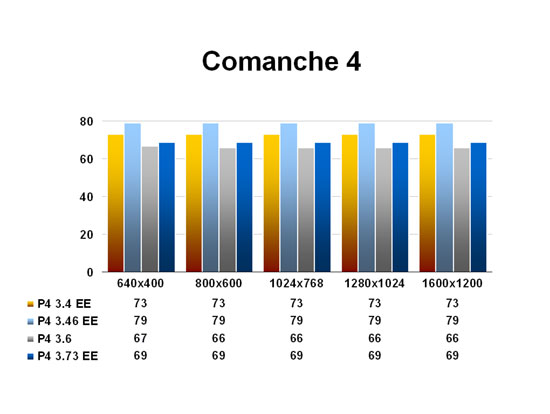 A piece of software that has traditionally scaled very closely with CPU speed, the C4 demo is apparently not fond of the Prescott core’s deeper pipelines (31 stages compared to Northwood’s 20). Intel described the C4 scores as an “anomaly,” though we’ll see if the lowered IPCs (instructions per clock) of the Prescott-based 660 and 3.73 also prevent their higher clock speeds from outpeforming the older CPUs in the rest of our test suite.

Lock On: Modern Air Combat was tested using the first three minutes of the MiG-29 Intercept demo. The in-game graphics default setting of low was used to see if the processors would display any performance differences. 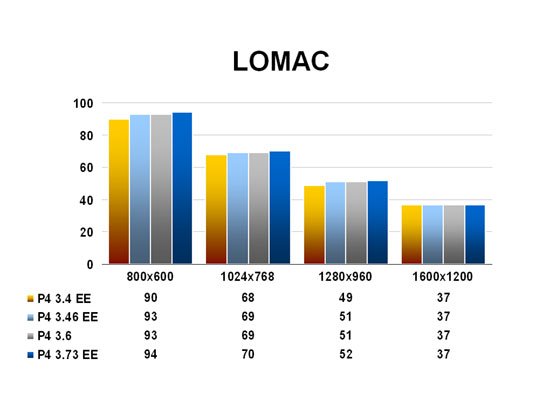 LOMAC gives the 3.73 a very miniscule edge at lower resolutions, but certainly nothing that would be discernible during actual gameplay. For a flight simulation, Lock On has definitely proven itself very dependent on the installed graphics board for good frame rates, even with lowered graphics settings.