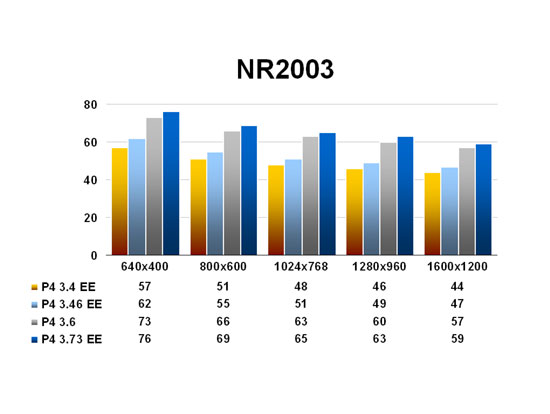 NASCAR is the rare title that scaled with the higher frequencies of the new parts, with the P4P 660 running extremely close to the 3.73 EEs scores despite the bus speed difference. Deeper pipelines take advantage of sequential code, and NASCAR Racing 2003 must be the rare game title that doesn’t include a lot of branching in its code, lending itself as the one benchmark that allows Intel’s new CPUs to dominate their older parts.

Installation of the new CPUs was as effortless as all other 775-pin, Socket T processors. The initial concerns over having the pins mounted on the mainboard rather than the CPU for Intel’s LGA design now seem exaggerated, and we’ve honestly grown fond of the ease with which the heatsink/fan combo can be removed and new processors installed. When we heard that Intel was re-launching a Prescott-based P4 3.6 GHz part, one with an increased transistor count over its previous iteration, we wondered if it would have the same heat issues as the first CPU; yet unlike the Pentium 4 560, the new 660 was never forced to reduced its clock speed while using the retail cooling solution Intel provided with their review sample. 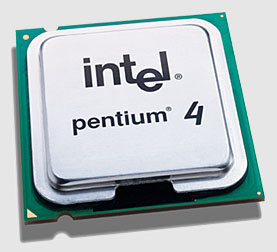 While Prescotts still have an enormous power draw, Intel has obviously somewhat improved the situation since last summer with new steppings for the architecture.

Less than a year old, the Prescott architecture’s deeper pipeline was intended to give the Pentium 4 family an extended lifespan in the mainstream market through Intel’s traditional reliance on higher clock speeds. Yet as the benchmark scores in this review demonstrate, the 660’s higher clock speed manages only to place it on rough par with the 3.4 EE, while the 3.73 EE fares similarly against the 3.46 EE. Clearly the added stages of the Prescott core are having an inverse effect on these CPUs’ IPCs (instructions per clock cycle), and it is interesting to notice the marketing shift Intel has begun taking away from emphasizing core frequencies to that of highlighting increased cache size, new features (XD Bit, EM64T), and other means of adding perceived value to their parts (including early rumblings about dual-core processors, which may or may not find their niche in the mainstream market). At the end of the day, however, what matters most is performance, features, and reliability, and while Intel has improved the latter two SimHQ is left somewhat disappointed that the first CPU launch of 2005 is so lacking in the former.