I almost didn’t buy the X52 because it’s a “twisty” stick. I hate twisty sticks, as I’m so ham handed that I unintentionally make rudder movements exactly when I don’t want to. The joystick has a little tab one can pull out to lock the stick in place! Very cool. That one feature ensured it would come home with me from the store. 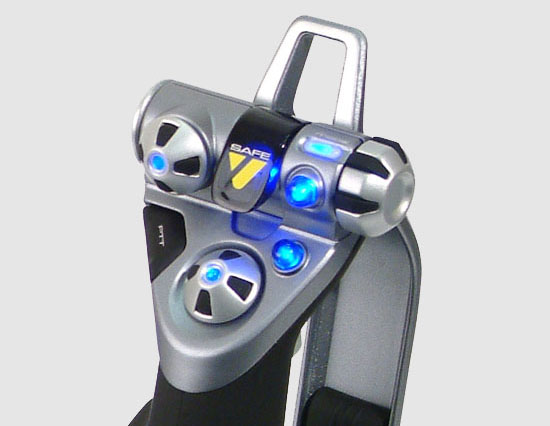 The bottom of the joystick — where the bottom side of one’s hand rests — is adjustable. If you’re one of those big hand guys, you’ll be right at home with the default bottom adjustment. I’m not a big hand guy, and it sure was nice to raise it up to where I can reach all the buttons on top and still hit the “pinky” switch.

The main trigger is really two buttons! Pull it halfway, it’s Trigger One; pull it all the way, it’s Trigger Two. The transition between them is subtle, but easy to feel for. I set it up to where Trigger One is the machine guns and Trigger Two is the machine guns + cannon. Now I can fire machine guns to line-up on the enemy’s six and when I pull the trigger all the way back, the cannons join in! This was an unexpected and very appreciated feature! They gave up the little button in the front of the joystick for it, but I’ll take that trade any day of the week.

The rest is pretty standard — two hats, two lighted buttons, the “safety” button with a little cover that flips up (I have that for “bailout”; the cover keeps from accidental jumping, but it’s still handy and an act of finality for me when I flip it up and push it.

The switch to change modes in profiles is now on the joystick to the right. I only program one mode, so it never moves. It’s light is reddish orangish.

There is a little black button that’s recessed a tad. It goes along the left top of the stick. It’s sensitive to the touch and right where I want to put my thumb. Either I’m going to have to program it away from my cannons, or learn not to hold the joystick that way.

At the rear of the base there are three “push down” switches. They actually go up and down, giving you six more commands on the joystick. Finally a place for dive and wheel brakes!

Immediately, one who has monkeyed around with the X45 will spot that the centering spring is much lighter on the X52. Very, very, light compared to the X45. I actually lubricated the X45 with some Ivory Soap to get it to move smoothly for me! Now you can keep the soap in the shower. The X52 centers nicely and moves cleanly. Learning to use the lighter touch is almost intuitive.

This brings us back to the “twisty” feature. They beefed up the amount of force required to twist the stick to about three times what it takes to move it along the X and Y axis. Twisting the stick requires effort, so I experimented this week with engaging it and seeing if I wound up fishtailing all over the skies or not.

They have solved the problem of unintentional rudder that most twisty sticks have.

I still don’t like to use the rudder in the flight sim (any flight sim), as precise control is an iffy thing (man… I need to buy some pedals!), but it’s on the stick and hasn’t caused any problems.