Last is NASCAR Racing 2003 Season, tested using a crowded Daytona track and a camera view set inside of Earnhardt’s cockpit. Graphics settings for detail levels were set at high, with effects and features unchecked; the lighting and shadow options were both enabled. 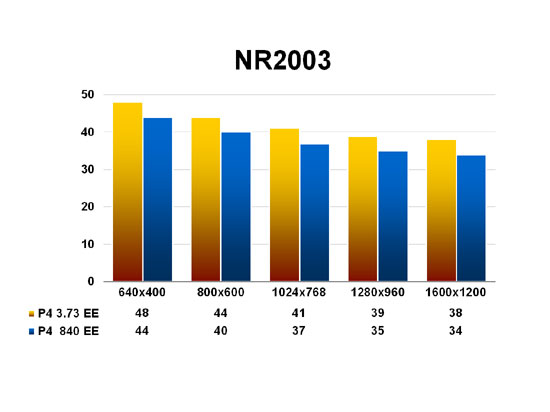 With so many cars on the track, the number of shadows makes this demo fairly CPU-limited, though the frame rate drop as the resolution scales upwards indicates that the demo is not 100% so. The 840 again lags behind the single-core processor’s higher clock rate, though only by roughly 10% across the tested resolutions.

With essentially all existing and shipping game titles coded as single-threaded applications, it comes as no surprise that the 840 Extreme Edition performs like a Prescott CPU clocked at 3.2GHz would perform. The dual-core processor’s scores consistently lagged behind those of the 3.73 throughout our test suite by 10% to 20%. The tested titles’ single-threaded coding was simply indicative of the current state of PC gaming and its lack of support for multiprocessing. Intel obviously seeks to change this by bootstrapping the market’s readiness for threaded applications, from consumer to developer, ready or not. While the 840 performs as expected, it is nevertheless disappointing to see what very well could be a watershed moment in the history of x86 processors fail to appeal to anyone this year but the most dedicated of video editors; yet as is often the case with graphics technologies, the hardware has to be the carrot to the software’s donkey and Intel seems willing to bet that they can lead the way.

Intel’s hyper-threading, the presence of a second logical core in a single-core processor, has now evolved into the first dual-core processors announced for the desktop market, though only time will tell whether or not Intel’s engineering effort of bolting two Prescott cores onto a single die that share the same controller to system resources will allow even fully threaded applications to soar. In contrast, AMD is instead focusing their first dual-core efforts on the server and workstation markets, which come with a host of threaded applications already available to make good use of the new technology. Yet the pace at which developers begin threading their games remains to be seen, though Intel could very well be relying upon the development software kits for next generation consoles that have been in use by developers for months now helping evangelize multiprocessing support. Either way, this performance preview is only a small glimpse at how dual-core processors handle today’s games, and multiprocessing as topic and technology will surely heat up later this year once the battle truly commences for mind- and market share. 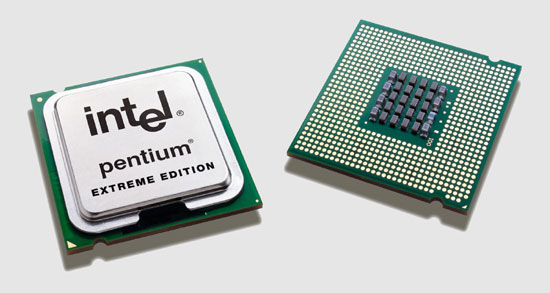