Following closely behind Intel’s dual core preview in early April, AMD is today announcing their desktop counterpoint with the Athlon 64 X2 lineup. This new brand consists of four processors that continue AMD’s naming convention of model numbers based somewhat obliquely on clock speed and cache sizes, ranging from the Athlon 64 X2 4200+ to the X2 4800+. 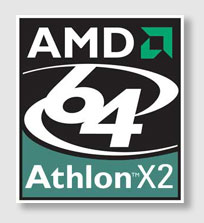 And with the announcement of the Athlon 64 X2 series, AMD is ending the vanilla Athlon 64s, leaving the 4000+ as the company’s last single-core processor for the brand; the FX series, however, will continue with the FX-57, a 2.8GHz processor due later this year. AMD has stated that the review sample sent to SimHQ is a production-ready part, with availability for the X2s starting this June.

The Athlon 64 X2 4800+, the high-end of the announced desktop X2 lineup, is a 2.4GHz CPU fabricated on AMD’s 90nm SOI (Silicon on Insulator) process with 128 KB of L1 cache and 1 MB of L2 cache per core -— essentially two Athlon 64 4000+s in a single chip in terms of clock speed and cache sizes. Based on the new Toledo core, a Rev-E stepping for AMD’s 1 MB L2 cache CPUs, the X2 processors have a total transistor count of roughly 233 million for the entire die. The X2 4600+ is also clocked at 2.4GHz, but offers a reduced L2 cache of 512 KB. The 4400+ and 4200+ likewise follow this pattern: both processors are clocked at 2.2GHz, with the higher model number offering a larger cache (1 MB) per core. These clock speeds, matching the frequencies of AMD’s current single-core offerings, are a sharp contrast with Intel’s 840 processor and its 600MHz clock rate disparity in comparison to the company’s fastest single-core processor.

Similar to Intel’s 840, AMD’s dual core engineering effort consists of joining two separate, unconnected cores on a single die that share the same access to system resources. Yet the X2 processors, like their Athlon 64 predecessors, benefit from an on-die memory controller that has given AMD a significant performance advantage over Intel parts, which must communicate execution requests across an external front-side bus to the north bridge chip. In contrast, the X2’s single memory controller, using a 128-bit wide crossbar switch, works with the System Request Queue (SRQ) in arbitrating execution requests to the appropriate core. This design should strongly benefit the Athlon 64 X2s when working with heavily threaded applications, and may continue giving the X2s the performance edge over Intel’s dual-core parts the single-core A64s have enjoyed for the past several years. The downside to this design, however, is that AMD’s dual-core processors will have available the same amount of memory bandwidth as single-core Athlon 64s, and with a maximum supported memory speed of DDR400 this leaves the two cores sharing between them at most only 6.4 GB of bandwidth. While this situation currently leaves Intel in a better position regarding memory bandwidth, their solution also suffers from higher latencies than AMD’s.

Compatibility with existing 939 Socket motherboards is also another strong advantage of the Athlon 64 X2s. For gamers desiring to upgrade from a 939-pin, single-core Athlon 64 to a dual-core X2 processor, AMD claims that a board BIOS update is all that is required. The ease of this upgrade path for current A64 owners could play a key role in market penetration for the Athlon 64 X2s, at least for this first generation of dual cores since the pin count of subsequent parts could change as AMD makes the expected move to DDR2 support. 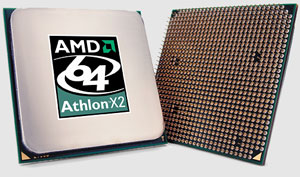 Pricing, however, could be an issue since AMD lacks the manufacturing capabilities of the competition, and initial yields on such large dies as the Athlon 64 X2s might remain poor until processes mature and new steppings are introduced. The announced dual-core pricing runs from slightly over $500 for the 4200+ to over $1,000 for the 4800+, removing the X2 line from the mainstream and gaming segments of the market.

The benchmark suite used to evaluate this test system is listed here. As standard practice, 32-bit color and trilinear texture filtering are the default baseline during testing, and anti-aliasing and anisotropic texture filtering were disabled throughout all tests, along with ATI’s A.I. optimizations. Also, Windows XP Professional was configured to have Automatic Updates, System Restore, and all unnecessary startup services disabled. The licensed version of Fraps 2.5.5 was used to record performance scores unless otherwise noted. And similar to our performance preview of the Intel 840, SimHQ decided to compare the Athlon 64 X2 4800+ against AMD’s highest clocked single-core processor, the FX-55 (2.6GHz). Both processors were tested running on the ASUS A8N SLI Deluxe motherboard.