The Comanche 4 benchmarking demo, a somewhat aged DX8 game that is nevertheless extremely CPU-limited, was run with texture compression and hardware shaders enabled and sound disabled. 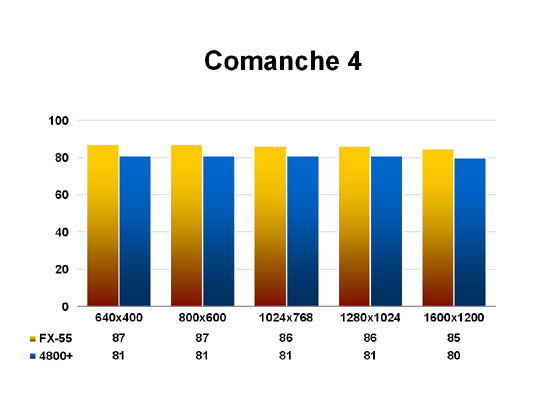 Both processors churn out over 80 frames per second, with the FX-55 leading by close to 10% at the lower resolution. Comanche 4 has continued to scale with higher processor frequencies over the years (though, as demonstrated by our recent articles on Prescott-based Intel parts, this isn’t always the case), so the 4800+’s slight clock rate deficit to the FX’s 2.6GHz resulted in the slightly lower performance, though the gap narrowed somewhat between the two CPUs at the higher resolutions.

Lock On: Modern Air Combat was tested using the first three minutes of the MiG-29 Intercept demo. The in-game graphics were placed at a combination of settings, with detail, scenes, and texture details at high, water at low, heat blr off, and shadows at full to increase the CPU workload. 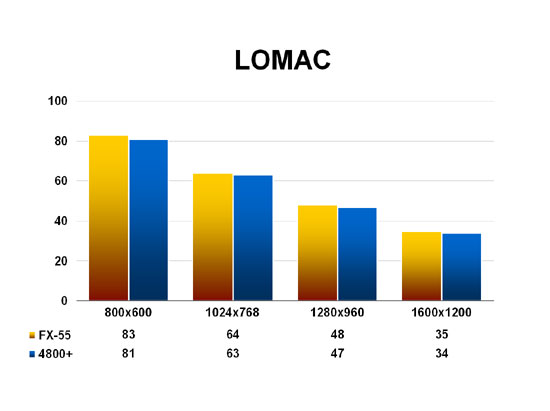 Something of an anomaly insofar as flight simulations go, Lock On is strongly dependent upon graphics processing for its performance and as such continues to display little variance between the clock speeds of the tested processors; the FX-55, however, did manage to nudge ahead of the 4800+ by just a few frames at the lower resolutions, though the frame rate difference would certainly be indiscernible during actual game play. Whether or not the game’s performance will continue to scale with next-generation graphics boards remains to be seen.