Falcon 4 was configured with the FreeFalcon 3.1 add-on installed. The only game in SimHQ’s current benchmark suite that shipped with SMP support, Falcon 4 was tested using our in-house demo of a low level, air-to-ground flight consisting of two Falcons using MK20s and Mavericks. Graphics settings were configured at their highest options. 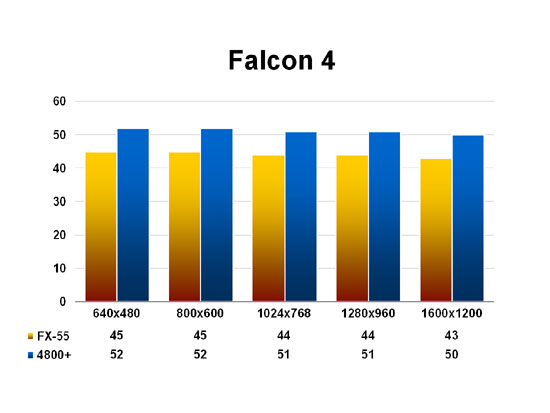 The multiprocessing support of Falcon 4 paid obvious performance dividends for the 4800+, allowing the dual-core processor to overcome the 200MHz clock speed difference and outperform the FX-55 for the first time during our testing. At 640×480 the frame rate difference between the two processors was slightly over 12%, with the margin increasing to over 15% at the highest resolution. Also worth noting is that the mission load times were significantly reduced with the 4800+ compared to those of the FX-55. Yet whether or not Falcon 4’s performance on the 4800+ is an indication of future games with SMP support or in some way atypical remains to be seen.

Chaos Theory is the latest in the Splinter Cell series of stealth games. The included Lighthouse demo was used for testing, with sound disabled and the .ini line for hardware shadow mapping set to false to increase the CPU workload (though this only affects performance by 1-2%). 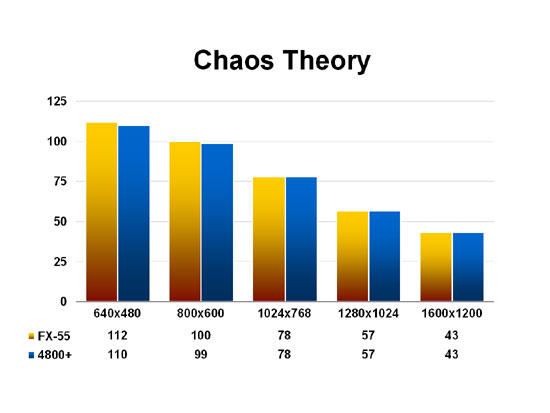 With a Radeon X800 XT installed only the SM 1.1 profile was available, which disabled a number of the more advanced graphics options (HDR, HQ soft shadows, parallax mapping, etc.) included in the game’s 3.0 profile. Nevertheless both processors performed quite closely to one another, with the FX-55 leading at the lower resolutions by only a few frames and both CPUs seeing their scores drop sharply as the fill rate requirements of the higher resolutions increased.