Call of Duty was configured with its video settings placed at their highest options since the title, based on the aging Quake 3 engine, hardly strains the latest high-end graphics boards. Scores were obtained from the Dawnville demo using the in-game timedemo utility to capture performance. 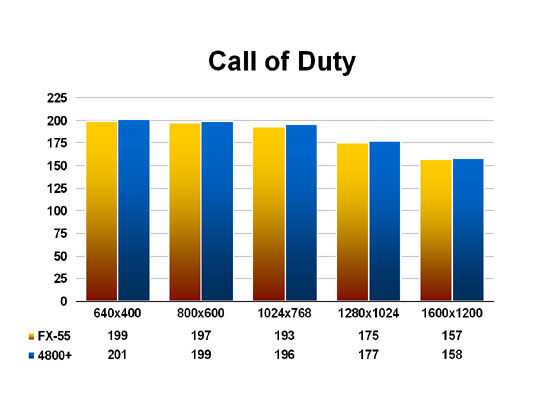 The original Quake 3 engine supported multiprocessing (enabled with the “r_smp 1” console command, though this was not used during SimHQ’s testing), yet Infinity Ward, Call of Duty’s developer, reportedly removed the SMP support from the game; strangely enough, the 4800+ managed to outperform its single-core rival by the narrowest of margins at every resolution tested. All applicable variables were double-checked to ensure that the test environment between the two processors was identical, yet nothing presented itself as a possible explanation as to why Call of Duty’s scores were atypical for a supposedly non-threaded game.

Last is NASCAR Racing 2003 Season, tested using a crowded Daytona track and a camera view set inside of Earnhardt’s cockpit. Graphics settings for detail levels were set at high, with effects and features unchecked, and texture filtering quality was set at normal; the lighting and shadow options were both enabled to increase the CPU workload. 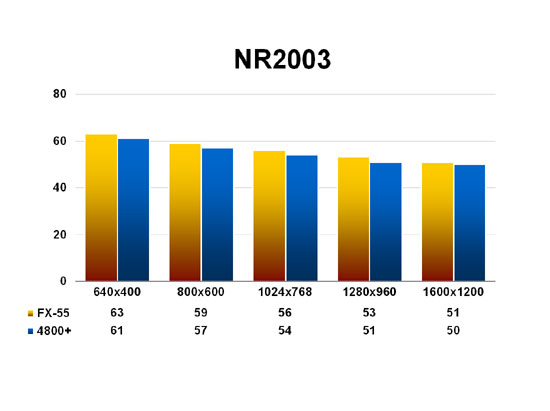 With so many cars on the track, the number of shadows makes this demo fairly CPU-limited, though the frame rate drop as the resolution scaled upwards indicates that the demo is not 100% so. As with so many other titles used in our benchmark suite, NASCAR showed the FX-55 leading the dual-core 4800+ by just one or two frames in each resolution, a performance difference that would not be noticeable during actual game play.