In addition to SimHQ’s standard benchmark suite, we also decided to test the multitasking capabilities of the two processors by ripping a DVD and playing a MP3 song (Blondie’s “The Tide is High,” if you must know) with Media Player 10 while running the Comanche 4 benchmark demo and comparing the performance hit, if any, both CPUs would incur. 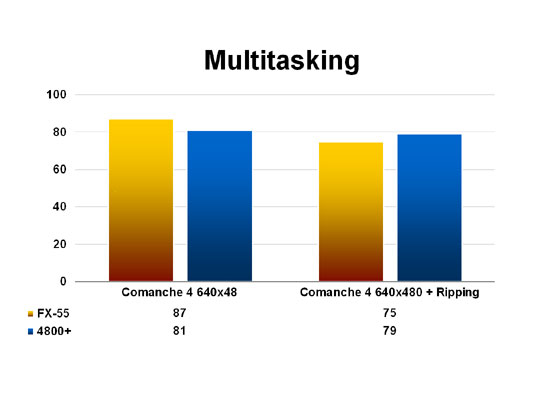 Neither of these additional tasks is particularly CPU-intensive, so the above scores were somewhat surprising. The 4800+ was hardly stressed by the applications, barely losing any performance due to the background multitasking; in contrast, the FX-55 dropped down from 87 to 75 frames, a 15% performance loss. This is potentially a good demonstration for the dual cores of the 4800+, and well worth noting by power users who make heavy multitasking demands of their systems.

While there were a few stability hiccups during testing, the performance of the Athlon 64 X2 4800+ speaks for itself and the test system was rock-solid with the FX-55 installed (the A8N motherboard was running with a beta BIOS release). The dual-core processor lagged behind the FX-55 by only a slight percentage in game after game, though with the small clock rate difference this comes as little surprise. Falcon 4, however, allowed the 4800+ to truly shine and is perhaps the wild card for displaying the potential of future performance gains from titles specifically coded for multiprocessing. Just how well Falcon 4 is optimized for SMP operations is an unknown factor, and how well the expected market arrival of dual cores this summer motivates developers to begin adopting multiprocessing support remains to be seen. Regardless, while SimHQ has not conducted any direct comparison testing between AMD and its competitor’s parts for a specific article, we could not help noticing that the 4800+ significantly outperformed Intel’s fastest single-core CPU, the P4 3.73 EE, in the lower resolutions of every game in our benchmark suite.

The Athlon 64 X2 brand’s compatibility with current 939-pin motherboards is a strong advantage for AMD, with the option of allowing current A64 users to upgrade to a dual-core platform with a simple BIOS update. Early adopters, though, may feel the lack of a clear upgrade path to second generation dual cores if next year AMD changes the pin count of the 939 socket or introduces a new core logic chipset for DDR2 support. Moreover, it is entirely possible that yields for processors with such large die sizes could remain poor until better fabrication processes (such as 65nm) arrive sometime next year, a problem that would impact pricing and availability. Yet the fact that the X2 processors share the same clock speed and cache size (per core) as existing Athlon 64s ensures excellent performance with current games and the potential to outperform similarly clocked single-core CPUs in future, SMP-optimized titles. AMD appears well poised to decisively win the first round of the dual-core performance fight.

We want your Feedback. Please let us know what you thought of this article here by completing the readers poll.