Last is NASCAR Racing 2003 Season, tested using a crowded Daytona track and a camera view set inside of Earnhardt’s cockpit. Graphics settings for detail levels were set at high, with effects and features unchecked, and texture filtering quality was set at normal; the lighting and shadow options were both enabled to increase the CPU workload. 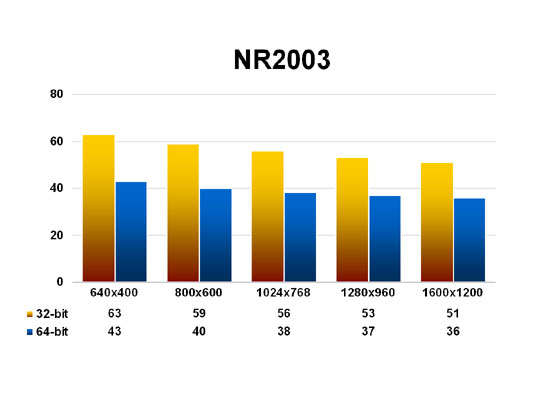 Like MS’ Flight Simulator 2004, NASCAR also saw a noteworthy drop in its performance while running on the new operating system. As demonstrated in SimHQ’s previous testing with the game, NASCAR 2003’s code probably has very little branching, and it’s possible that the WOW64 emulation layer is creating a bottleneck with the game since it showed the worst performance loss among SimHQ’s benchmark suite. This is also likely to be the last article in which SimHQ uses NASCAR Racing 2003, replacing the aged title with GTR as our new motorsports benchmark.

Within the scope of SimHQ’s benchmark suite, game performance on Windows XP Pro x64 is a bit of a mixed bag. Out of the eight games we installed and tested, seven were compatible (Splinter Cell: Chaos Theory refused to run), and of those those working titles four gave benchmark results within a few percentage points to those generated on the 32-bit version of the operating system. This means half of the games tested were either incompatible or ran unacceptably in comparison to performance on the older version of Windows XP. Beyond game performance, existing system components and add-in cards for sound, graphics, networking, etc., all require updated 64-bit driver support for the hardware to work with Windows XP Pro x64, and depending upon the vendor certain parts could see months pass before receiving this support (if ever). And to truly take advantage of the x64 hardware means using 64-bit applications, which could likewise be slow to market arrival. While x64 processing is undoubtedly a part of desktop computing’s future, SimHQ sees no urgent or pressing need right now to recommend upgrading from the 32-bit version of Windows XP, even for those currently running x64 processors. Early adopters willing to overlook these issues, however, can upgrade knowing that the majority of their simulations won’t have any compatibility issues running on the new operating system, though performance is liable to be hit-or-miss.