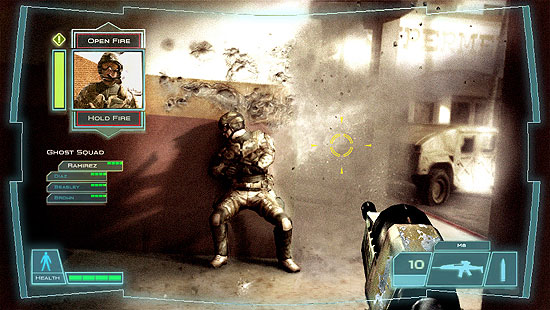 One of the more impressive looking titles that I saw was an Xbox 360 demo forGhost Recon 3. Just looking at the graphics of GR3 really impressed me. While I am not a major console fanatic, it had the look and the feel of what could be one of most impressive tactical shooters created, if it makes it to the PC. It really looked like you were walking down a street in Mexico City, the detail is amazing.

This brings up a concern of mine with a PC version of Ghost Recon 3. I have been assured that there will be a PC title of the game out and that they are going to work hard on the title but the impression that I received is that the Xbox 360 version has gotten the lion’s share of the developmental effort and that the PC game version has essentially been minimized at this time. I have been told that there will be a PC version announcement in two months but the lead developer of the game was very tight lipped over what will be in the PC version.

I’m looking forward to checking out Operation Flashpoint 2 (working title). Look for us to check that one out tomorrow. Likewise we will get an up close look at the latest America’s Army, checking out the latest version and hopefully learning more about the direction this title is going. I also plan on getting up close with 1C’s WW2 RTS. This game has gone through more name changes than Prince, going from its original name to Battlefield Command or something like that, to Wartime Command and now back to its original title. I don’t care what the name of it is; I want to finally see it up close. It sounds like it is getting fairly near its release date so I want to hopefully get some time with it.

Ultimately it looks like the Tactical Shooter market for the PC will be alive and well. The Battlefield 2 version for the PC looks heads and shoulders better than the current Xbox or PS2 titles meaning that at least until the Xbox 360 or Playstation 3 comes around the PC shooter market will remain strong. I am somewhat concerned that the PC versions of these titles may not continue to flourish in the new Xbox 360 or PS3 environment. The graphics of these console games appear to have finally caught up with the PC and the ease of programming a title, especially when compared to the multiple disaster that is programming for the PC. I honestly think that in the future we will see less and less as far as shooters for the PC and more and more for the newer console systems. Right now companies like Bohemia Interactive, companies that made their bread and butter on games like Operation Flashpoint, spend most of the web page space on PS2 and Xbox versions of the game.