Here’s a short rundown on the motorsports-related products we saw today: 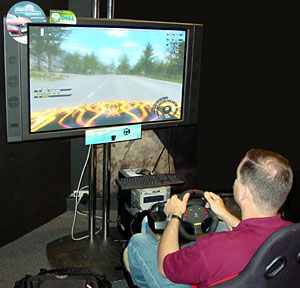 Adam Tutaj, PR & Marketing Director for Techland (developers of Xpand Rally) showed us an early alpha build of VW Golf Racer, a new lite racing simulation for PC and console. With the contract for developing the sim only 2 weeks old, the developers only had a very early Alpha build to show at E3, so there is still much coding to be done on the higher end of the physics model. Indeed, Adam stated that more physics model options are planned as the game progressed towards in the final build. Of note, Adam added that once the game goes gold, the plan is that the game’s web site will offer a download for more demanding physics model that caters to the hard-core racer, rather than shipping the game with a high-end physics model as a distracting in-game option, or as an “Easter egg” buried within the code. That might seem a little weird to us hard-core types, but if the producer actually does create a high-end physics model, offering it to the hard-core crowd via a web site download might have some positive aspects for both the sim consumer and game developer — as opposed to not providing a more robust physics model at all.

In addition to car physics, the physics of structures are also modeled — so that if you crash through buildings, things will break up in a realistic fashion. Adam gave an example of a car driving through the doors on a large building, and continuing on with some damage, as opposed to driving through a wall and destroying your car.

Speaking of vehicle damage models — VW provided the license to model their cars, but specified that any damage model cannot effect the passenger compartment of the car. However, engine, body panel, suspension can be damaged and effect car performance.

Tuner parts available in game to customize and upgrade your car in “campaign” mode. Also a garage that allows you to tune your car’s components to optimize performance.

Editing tools for tracks will be offered, as well as for game modes and cars. Rules, AI logic and physics code will also be mod-able by 3rd party organizations.

Up to 8 players will be able to compete in Multiplayer mode. 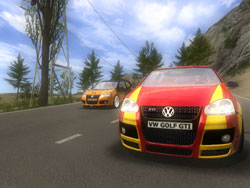 Driving Impressions: VW Golf Racer felt a bit like a Rally sim in terms of basic physics model and car handling. The course offered was a paved surface of highway roads, some areas with sweeping corners, others with tight, decreasing-radius corners over undulating terrain. As typical for game demos at a large event like E3, the game was set up to cater to the casual arcade gamer, with forgiving physics, automatic shifting, and many driving aids. Due to the pre-alpha build status of VW Golf Racer, I can only give general impressions of the driving “feel” offered by the game, but lacking the ability to disable driver aids and engage more realistic and unforgiving physics, I can’t really get too deep on what the game might offer at the limit. What I did experience was a rather loose driving model with plenty of oversteer and understeer, depending on how you entered a corner. Oversteer was very controllable and could be modulated with judicious use of throttle and brake. You could drive the car with the throttle, which is a promising sign in any driving sim. The pavement was quite slick, adding to the Rally-ish feel to the physics model. However, leaving the pavement was not a problem, and in fact it almost felt as if a supernatural force would “coax” my car back onto the paved road if I made an excursion onto the turf — exceedingly forgiving. The graphics were rather nice also. View options included bumper view and hood view, but no in-cockpit views were built in time for E3. No mention if in-cockpit would ever be a view option. Weather was also demonstrated with a rain shower that popped up during a race, but it was noted by several drivers that wet pavement was no more slippery than dry in this early version of the code. 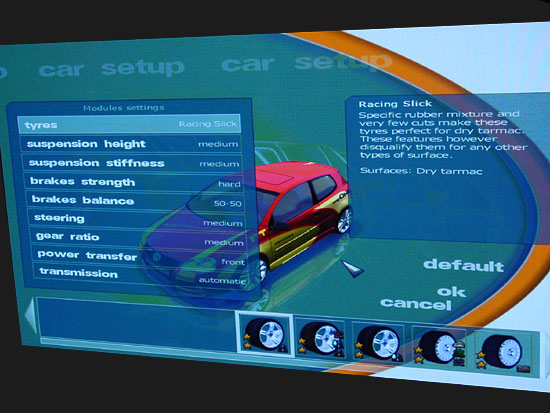