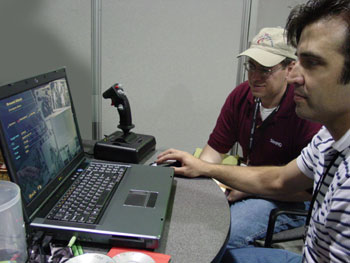 The other exciting game I saw was Battle of Britain II from GMX Media. I could really tell that Scott Gentile has really gotten into this game and his enthusiasm has spilled over to many of us here. I honestly was somewhat luke warm towards the title when it was announced. I really liked BoB but didn’t think that there would be enough time to significantly improve the original game in the agreed upon development window that Scott had.

I was wrong; the Shockwave team has really done an outstanding job with what they have so far. I was quite pleased with quite a few of the changes that have been made. The extremely twitchy flight model has been cleaned up significantly and is now much closer to reality. Chunx still thinks that it may be too twitchy at times but overall it is improved.

The graphics are the major upgrade to the game. BoB had a generally strong physics and game engine design but the graphics were fair to good at best and some aspects of the game looked horrible. BoBII looks much better. The terrain, while maybe not on the LOMAC level, looks much more realistic and the color schemes appear to be much closer to reality. Water textures are massively improved. I honestly cannot wait to see what this game looks like on a high end system.

Scott was showing us the graphics on a laptop and they looked quite good but I am guessing this was something akin to a GeForceToGo type of vid card and not the latest hardware crunching video box that some of us are considering. The game looked good though, actually quite good. Scott said that most of the coding for the game was done on a GF3Ti equipped computer so those folks with less than top of the line specs should be able to run the game comfortably. 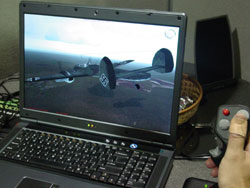 Probably the most impressive, and improved feature of the graphics is the bomb and smoke effects. The explosion effects are very impressive. I honestly think that the explosion effects rival and probably surpass most other games currently made. What I saw makes the effects without a doubt the best seen in any flight simulation. I mean any. They are better than IL2, better than LOMAC and they come close to, if not surpass the explosion graphics of Silent Hunter III. That is something Scott should be proud of.

The other graphic improvement that jumps out right at you is the clouds you see in the game. No simulation has better cloud effects; period. The clouds are awe inspiring in this game. Just going up and flying around aimlessly in the sky is one of the more enjoyable aspects of this game.

The other thing that is improved significantly is the cockpits found in the aircraft. I never thought the pits in the Spitfire or Bf 109 looked that bad in the game until I got a chance to look at the pits that Shockwave has imported into Battle of Britain II. These are absolutely outstanding, and will come as pleasant shock to folks.

One thing that you might as well know is that Battle of Britain II will not ship with any multiplayer content. For those of you that know the original game well you realize that the title ships with a broken multiplayer setup that was literally useless. It was almost impossible to play, even getting a connect with someone was a one in 20 shot. Scott made a decision early on not to get bogged down in the multiplayer code and instead devote himself to fixing as much as humanly possible in the limited time he had allotted.

I have to say I agree with him on this one. I have said before that no multiplayer is better than bad multiplayer. I also understand that fixing this problem would mean that the really important fixes, like the flight model fixes and the graphic upgrades would be either minimized or discarded. Scott made his selection and to me it was a wise one.