I saw two things that were fairly impressive to me. The first one was the America’s Army booth which looked to have cost the taxpayers at least three M1 tanks to set up. It was that impressive. We got a chance to sit down with the developers and discuss the latest release of the game and what the plans are for AA in the future. I also was heartened to hear that this game is not just a recruiting tool but that the US Army is using this game to help train current and future soldiers in combat scenarios. I won’t go too much into depth concerning the updates, it is beyond the scope of this magazine but soldiers will get a chance to familiarize themselves with much of the newer high tech equipment in a virtual environment prior to their use in a real world environment. 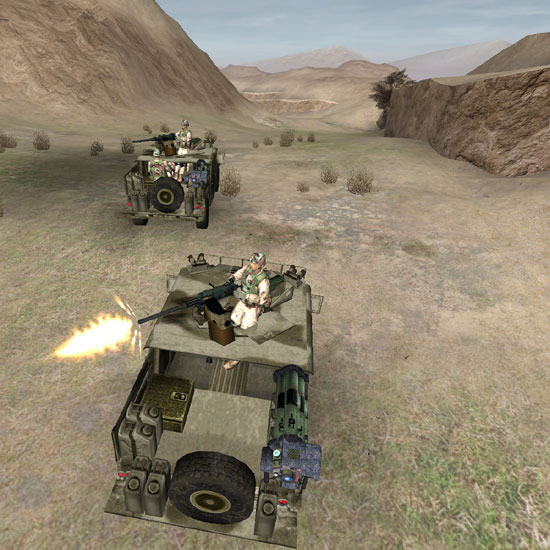 The game currently shipping is running off the latest version of the Unreal engine. That means that crewable weapons systems and vehicles will either be in the game very soon or will be part of the game in the near future. The goal is to eventually allow for the crewing of all kinds of equipment in the US Army arsenal, ranging from Hummers to Apaches.

For those that are familiar with AA the setup is still the same. Players generally can start out familiarizing themselves in basic training where the learn basic rifle marksmanship, first aid, grenade usage and other basic skills that new recruits are trained. Later on troopers can train in some specialties and become qualified in some identifiers like Airborne school, Ranger School and eventually earn their Special Forces tab.

Yes, it is still somewhat arcadish although the game leans much closer to the simulation side of the house over the gamey side. The game definitely leans closer to Rainbow Six than Far Cry. Target reticule effects are not shown per se on the screen but your likelihood of getting a hit while moving are slim to none. Rambo style attacks are eschewed in the game and the plan is to increasingly reward team play over individual accomplishments.

Another plan in the future is the possibility of adding AI soldiers into the game. The game right now does not have a true AI, the only offline gaming you can do involves the training missions. There are plans on changing this but when we will see this is anyone’s guess.