Our schedule book for Thursday was pretty full with meetings for Tactical Shooters, flight sims, and computer hardware, but our first appointment for the day was with race developer 10Tacle studios, where we received a briefing from Senior Designer Rod Chong and Public Relations Manager Marcel Jung on their latest hard-core racing simulation, GT Legends. Also present at this briefing were media reps for G4, Gamer Planet, Automobile Magazine and of course, your very own SimHQ.

Game Concept: GTL utilizes an upgraded version of SimBin’s GTR racing simulation engine to recreate vintage racecars from the 1960s. But the racing that takes place is not set not in the past, but rather in the present, where vintage race car organizations host shows and races of these meticulously restored and maintained road warriors of the past. Certainly a novel execution of an interesting game concept. 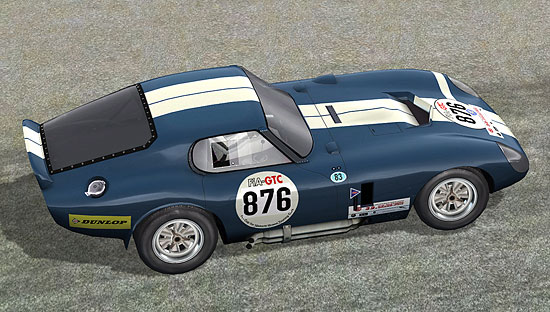 The era covers racecars from 1958 through the mid 1970s, certainly a “golden age” of racecar design and diversity, with classic cars like the AC Cobra, Porsche 906 and Austin Healys all competing on tracks around the globe. GT Legends focuses on two primary classes of racing from the old FIA categories. In the Touring Car class, you’ll be driving Cortinas, Mustangs and the venerable Mini. In the GT class, cars like the Shelby Cobra, Corvette Stingray, Pantera and Ford GT40 are all available. Other cool cars from the past included the Pantera, Capri, and cars from Alfa Romeo. All in all roughly 90 different cars are modeled in GTL. In order to get the required detail, the design team contacted the owners of the each vintage race cars modeled in the game. Exhaustive data collection was done on each car, allowing the design team to meticulously model each car’s suspension components and geometry, engine performance characteristics and 3D shape. Graphic and physical representations of suspension components were accomplished using upgraded and advanced version of the GTR physics engine. In GTL, the physics engine even monitors engine temperature, and at lower temps (such as at the start of a race) the car will emit a greater level of smoke from the exhausts. Another nice touch. The result is simply breathtaking. If your heart doesn’t beat a bit faster when you see these cars in the game menus, you might have a serious health problem — seek immediate medical attention.

As in GTR, all the race tracks are faithfully and painstakingly reproduced using satellite and GPS mapping techniques that model “every bump” in order to provide the best possible representation of the real racing environment. Dynamic and changing track conditions are also modeled in GTL, such as the gradual build-up of rubber debris and dust off of the racing line, which makes the track even more treacherous as a race progresses.

Because of recent issues with product licensing and intellectual property rights claims when modeling historical aircraft and automobiles in simulation titles, we asked the 10Tacle studios team point-blank this new legal reality when developing GT Legends. Their response was that within FIA sanctioned race categories, the FIA acts as the single point source for all products licensing of racecars in their series. When developing this title, 10Tacle petitioned the FIA and received a license to model all the cars and series represented in GT Legends.

Racing Season starts player off driving the Mini (a relatively easy car to drive, allowing the player to master the physics model and various tracks before moving up to higher performance models). The goal is to prevent newbies from selecting the most demanding cars to drive and then becoming quickly discouraged with the game.

In the current vintage racecar series, the FIA specifies that all cars must be prepped to their era’s standard. As such, the vintage cars use the state-of-the art technology from the ’60s, such hard compound, bias ply tires, etc. Rod noted that the slippery tires translate well into the sim world, and make for a more visceral and exciting sim experience as much as they do for the real vintage drivers as they drift and oversteer their way around the track.

Racing and Practice sessions can be altered by the player at the start of each session, with dynamic lighting models providing the proper lighting condition from dawn to dusk, and into the night. Players can also set an accelerated time-of-day feature that can force day/night racing transitions at rates of up to 16x real time, allowing you to conduct LeMans style racing even when on a time budget that might not allow for a full 24 hours in front of your PC.

One of the most impressive visual demonstrations we observed occurred when Rod cranked up a test session at Hockenheim during the night hours. The headlights on the car were really spectacular, truly a revolutionary leap forward in presentation that reminded me a lot of the flashlight rendering in Half Life 2. Equally impressive were the trackside lights and how they lit up only portions of the track surface, then faded out in intensity around the edges.

Although we always think of great graphics as a key element of a high-end simulation, game audio remains a critical yet under-rated aspect of simulation titles. Sound not only adds immersion but aids in conveying the performance status of the car while braking or cornering. The 10Tacle team didn’t underestimate the importance of sound in GTL, and took the time and budge to wire the real life cars modeled in the game with sensitive microphones at locations on the car the corresponded to the various view angles provided in the game and replay engine. This ensures that whether reviewing a replay or driving a race, the sounds you hear in the game will accurately match the real car’s sounds from that point of listening. Of note, the team’s microphones gathered more sounds than they bargained for, when one of the car’s they had rigged with microphones was involved in a crash during a recording session. Of course, that gave the team even more sounds to use — including the sounds of a racecar crashing!

We asked about Multiplayer modes, and were told that the MP module in GTL will be the same one used in GTR. 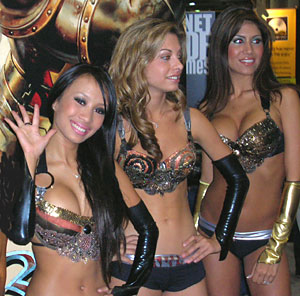 Driving Impressions: Rod set up a practice session and race for me at Imola so I could get some seat time in GTL. He wanted me to try two cars with widely different performance characteristics, and so he selected first the ’66 Mustang coupe and then for comparison a late ’60s Alfa Romeo.

The Mustang was a real handful on the curves of Imola. With weak brakes, superb horsepower and a heavily burdened suspension, the pony car had to be slowed early and gingerly before entering each corner, then aimed carefully towards the turn exit with generous amounts of throttle induced oversteer. It was actually a bit fatiguing to drive the Mustang around the track. In contrast, the Alfa was very light and tossable, eager to enter the corners and with strong brakes quite adept at late braking during corner entry. The differences between these two cars almost felt like two different sims — a great credit to the superb physics engine in this game.

One interesting feature found in GTR and now in GTL is the ability to engage an “autopilot” while driving that allows the car to drive itself in the event you have to answer the phone if you don’t feel like pausing the game. I thought that was a nice feature, since un-pausing a race car at 150+ mph usually results in a crash, whereas flowing back into the cockpit and then disengaging the autopilot makes the transition a bit smoother.

As the game neared completion, the actual owners of the vintage cars represented in the game were allowed to drive their car’s virtual counterpart, and 10Tacle reports that the owners were “very impressed” with the quality of the representations in GTL, often saying that the game was spot-on in its rendering of their car’s performance characteristics and feel. I think 10Tacle has a real winner on their hands here, and I’m sure that the hard-core racing sim fans at SimHQ will soon add GTL to their short list of favorite racing titles.