Automobile racing isn’t the only form of land-based motorsport out there. Motorcycle racing is also quite exciting, and with THQ’s new MotoGP3, we have another form of racing to experience on our home PC or console system. Having seen MotoGP3 for the PC and console on display here at E3, and been frustrated at the game’s underwhelming presentation by THQ, Microsoft and Nvidia with either “realistic keyboard control” or game pad, I started on a quest to find a handlebar controller for PC motorcycle games.

By chance I stumbled across a meek Chinese controller company called Arcade MX (www.arcademx.com), which had a large display of entry-level wheels and game pads, primarily for the PC. One item in the far upper corner of the booth caught my eye — a motorcycle handlebar controller with programmable buttons. The company rep that greeted me didn’t speak much English, but he did indicate that the item was available for sale at their online store. Unfortunately, the handlebar item was quite new and wasn’t listed in their product brochure, nor did the company have any demonstration PCs with their hardware connected. I’ll go online and see if there’s more info on this product.

Later in the day I came across a booth that had a beautiful MS-1 motorcycle handlebar controller officially licensed by Yamaha, which sells for about $70 USD. These handlebars had high production values, great build quality, looked sharp, felt durable… and were only for console applications. When I asked if the company had the controller in a PC version, or if the PS2 version was cross-compatible with the PC (as Logitech’s Driving Force wheel is), I not only got a curt “no, of course not” from the marketing rep, but the response was delivered in a sneering, “why would we want to offer a PC controller??” manner that kind of ticked me off. Not very good product presentation, if you ask me. 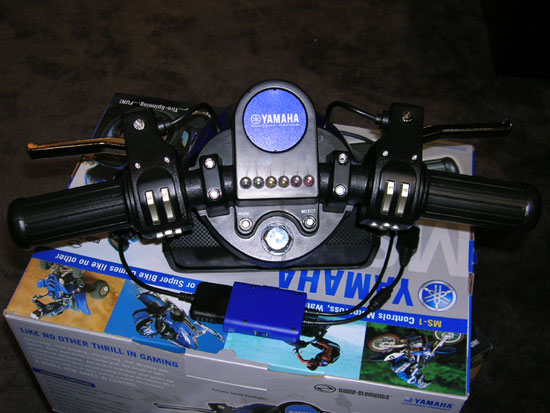 So here was a stack of really nice looking, high end console handlebar controllers more than suitable to showcase a hot new motorcycle game right here at E3, but did THQ, Microsoft or Nvidia choose to work with the manufacturer and plug a couple into the demo games of MotoGP3? Why no, of course not. Who would ever think to drive a car game with a wheel or a motorcycle game with handlebars, when a really nice game pad or keyboard is available??? How silly of me. Sheesh.

There, I said it. If you’re still with me, take another slug of that adult beverage you’re working on, or go and get another. I’ll wait.

OK, let’s talk. Knowing the concerns of the simulation community we represent, guod and I met with representatives of StarForce Technologies and had a useful and interesting discussion with them. As you probably know from various threads in the Silent Hunter 3 and Lock On Flaming Cliffs Forums, Community Hall, and others, StarForce has generated a level of controversy, and quite frankly, heat with their anti-piracy software that I haven’t seen around here in a long time. Bad enough that many members have openly voiced their opinion that they would not purchase a sim that otherwise looked like a sure-buy because of the presence of StarForce and what they feared would happen to their PC’s if they did.

First, a little background. According to StarForce, software piracy worldwide costs the industry in the neighborhood of $28,000,000,000 annually. You read that right, a number in front of 3 sets of three zeroes each, with commas no less, puts you into the Billion-with-a-B dollar category. That’s a staggering amount of money, and if even half-ways correct certainly validates the need for some type of piracy protection, and with the ever-increasing cleverness of the corrupted cracker crowd, piracy protection that will stay ahead of them.