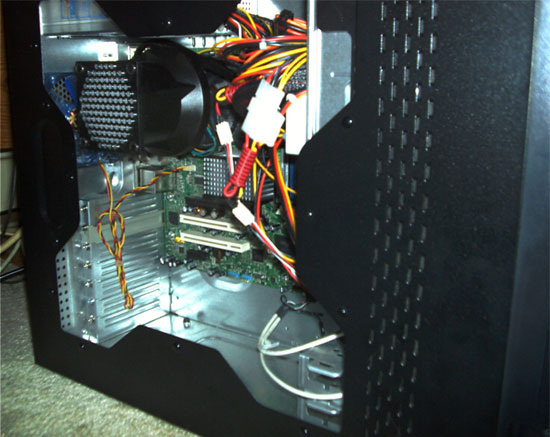 Three weeks after playing around with this machine the motherboard finally let go. Exchanging ideas with SimHQ’s Hardware forum gurus, we were all in agreement that it was the PSU. Of course it was no fault of theirs. I was hoping it was only the PSU and probably helped fight for that to be the problem. After I swapped out the PSU for a no-fix I closely inspected each of the circuits on the motherboard and found one had a burn mark (discoloration) on it. I asked our own John Reynolds to suggest a comparable replacement board so I jumped on Newegg.com and ordered a new motherboard. This particular board needed a graphics card so I once again went back to SimHQ and asked for affordable suggestions with the most bang for the buck. An overwhelming reply for a GeForce 6600GT came back to me. I might as well throw one of those on the invoice too. Heck, by now I’m so far overbudget from what I quoted to the wife I might as well go for broke. Anyway, it’s easier to beg for forgiveness sometimes than ask the wife for permission. [Thanks Big_Beer for the quote]

A week later the new motherboard and graphics card arrive via FedEx. Another quick question to the SimHQ Hardware forum guys for a good thermal paste (answered within an hour of posting), a trip to the store, and a couple hours later the reactors are purring on my new machine.

A month or so after beginning this project with a lot of trial and error (NOT suggested by any means!) I’m a proud owner of my very first home build. If you have questions…ASK somebody or do your research on the net. Don’t press your luck like I did. Don’t think you can put a computer together the first time like you might tackle other “assembly required” things without reading the instructions, researching the net, or asking opinions.

Now comes the fun stuff…SIMS! After my drought with the old rig I felt like a kid again. What to load first!?! Heck, I hadn’t even bought any new sims since Lomac because that was just a joke on the P3 and Win98SE. I never could get it to work right, and the game case even told me so.

I decided to install MSFS 2004. After all of the screen shots on high end machines I just had to try with maxed out graphics. What a dream! Flying a Kingair 350 around the Virgin Islands was beautiful. I almost got a little vertigo because it’s looking so real and so smooth. The GeForce 6600GT video is a huge improvement over the old GeForce MX420 card on the P3.

Next I decided to give America’s Army another go. I had played this a lot up until the medical patch was released. It became just too demanding on the old P3 and wouldn’t work anymore. Wowsers…an 855MB download! It took me a half an hour to download and install! Oh, did I mention my 4Mbps cable connection to go with the monster rig? I breezed through all of my training except for the ones added since I quit. It’s pretty neat to see people actually walking around instead of the slide show I was used to. Back in the old days I would get hit and just be confused as to where it came from. Now I can almost see the bullet coming right at me…heh!

The graphics card was bundled with a couple newer games, so I installed Joint Operations: Typhoon Rising just to see what this card can do. While “flying” *cough* the helicopters in training, I was surprised by the amount of foliage and background things going on…while blowing things up “real good”. Never a stutter, no jaggies, smooth as glass. Many of you already know and appreciate these things, but I’m one happy camper because this is incredible compared to what I was used to.

I haven’t had time to try every sim yet, but LOMAC will be installed soon. And since this is pretty much the benchmark for needing a powerful rig, it should be good.

For what it’s worth, now that I know, it is easy to build your own rig (if you follow instructions to the letter). I’ll never buy a prebuilt computer again. The savings alone are worth it. I figure I saved about $1,000 on a gaming rig.

I’m now the proud owner of (a finally operational):

I thought I could do it all myself, but I couldn’t have done it without our own “guod”, John Reynolds and the incredibly knowledgeable members of the SimHQ Hardware/Software Forum. You guys ROCK! Well, okay, I probably could have with another forum, but it’s best to keep it at home with people I know and trust.