Most standard hardware will need new drivers to work under the new operating system. Most standard 32 bit drivers for Windows XP will not work under the new operating system. Attempting to install them will either get you an error message stating that the driver does not support your OS or what you install will not work with your current setup. The problem that arises is a similar problem that a lot of Windows 95 users had when they updated from Win 3.1/DOS. It is taking some time for companies to come online with the new OS. According to NaturalPoint the rewrite of the drivers is not as simple as an update but requires a whole reworking of the code to allow for things like the Track IR to work under XP64.

What drivers are available for the new OS? The list is increasing daily. I do know that the current video cards (i.e. NVidia and ATI) have current drivers that work fine with the new OS. My computer has a GF6800GT installed and a driver was just a click and download away. Sound cards, like the Audigy series, have updated drivers and from what I have seen most modern hardware suppliers already have an updated driver out or will have one by the time this article is published. Still, before you go and update to the new OS I would highly recommend that you check your hardware setup and make absolutely sure that you have or can download drivers that will work with WinXP64.

Some hardware doesn’t work with the new operating system. While the Sound Blaster Audigy worked fine with the new OS, there were no new drivers available for the older Sound Blaster Live series. This presents a significant problem for anyone trying to upgrade only a portion of their computer and keep costs down by reusing items like sound cards or standard modems. Granted most new motherboards come with onboard sound and modems but not all of them do and I am sure there are some folks that still prefer their legacy equipment, if only for the comfort they have using it.

As far as gaming goes, I have found two significant pieces of hardware that either will not work or has limited functionality with the OS. My CH USB Fighterstick/Pro Throttle/Pedals work fine under the standard joystick interface. The issue comes with add in software like the CH control panel. I could not get the CH control panel to work with the new operating system so folks with the CH setup will either have to wait until an updated control panel is released or they will have to stick with the Microsoft joystick control panel and program your games under Direct X. This also means that mapping keystrokes to the current CH joystick seems to be unavailable, at least for now.

While the CH stuff works to a degree, the TrackIR3 Pro that I have doesn’t work at all. A visit to NaturalPoint’s site shows that there probably will be an updated driver for the TIR but don’t expect it anytime soon. For those folks with X64 that also shelled out significant money for the TIR, you will find that it is essentially useless. This really had an impact on my flight simulations. You forget how much the TIR enhances the sims until you cannot use it. I have had little desire to play anything like IL-2 without the TrackIR.

I consider the inability to use the TrackIR with simulations to be a major strike against the new OS. I know that in the future you will find support for XP64 but how soon this will happen is anyone’s guess. There is discussion on NaturalPoint’s boards about adding X64 support for the TIR3 which will be great. I doubt there will be coverage for legacy products like the TrackIR 2 or 1. Since NaturalPoint has essentially decided to not update the TrackIR2 software in the future, I highly doubt that users of the older tracking software will be able to use their TIR with X64. I may be wrong and they may release a driver but don’t bet the farm on it. 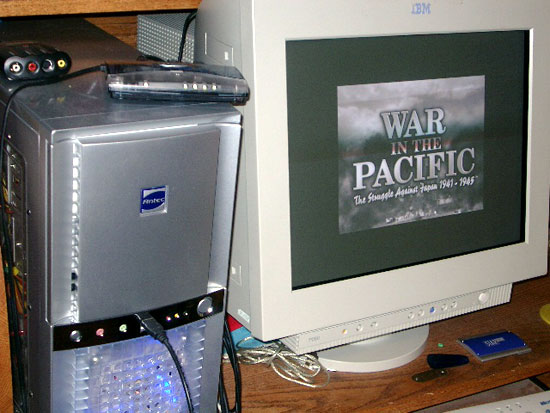 Software applications also tend to be a mixed bag. MS claims that current software will run with the new OS and, in general, this is true, but there are some significant applications that don’t work with XP64, a couple of which are very, very significant. Actually, some of these are quite surprising.

Most games run fairly well. John looked at several games with the OS and, in general, the difference in the speed of most games was negligible. Unlike John, I had some serious problems running Pacific Fighters in Open GL but the game ran beautifully in Direct X mode. I am sure there is a compatibility problem somewhere in my system that makes PF run like a slideshow so I will figure it is something probably unrelated to the OS and probably more of a hardware issue. I have the same motherboard and RAM as John so I suspect my problem may be sound card related and not related to the OS.

Other mainstream games seem to run fairly well on the operating system. I actually finished up my review of The History Channel, Bull Run on the new system and it ran it beautifully. Aces High runs on it fairly well although I don’t get TIR support that I have become used to. Silent Hunter III and America’s Army runs well on the game. A 2D game like War in the Pacific seems to run better on XP64. The loading time on X64 is almost 1/3 the time with a comparable version of XP32.

In fact, the only gaming software that I installed that didn’t seem to run on the game is WW2 Online and the aforementioned CH Control panel. In general most games will probably have no problems getting their games to run under XP64 but I still advise that you check before installing the new OS. Since there have been some problems, especially with older software with some games on the OS it is advised to do some research. It would be a shame to upgrade only to lose your favorite game.

John did the look at most games and their speeds with XP64 vs. XP32 so I won’t go into depth with that. In general you won’t be able to tell a difference between the systems while running the games so most folks won’t feel a loss with XP64 as far as gaming goes. The question arises then, what is the significant reason to upgrade your computer?