Despite the drawbacks mentioned previously, my overall impression of the TripleHead2Go was exactly what I expected it to be: Wow, this thing is cool. Unlike a dual monitor configuration which is excellent for productivity but generally not too useful in simulations (exceptions are sims such as MSFS that support dragging windows to a second monitor), using three monitors with the TripleHead2Go is an excellent situation for both productivity and simulations.

The TripleHead2Go is best used with three identical monitors. As I mentioned before, my two primary monitors are 21″ CRTs. These are P1100s, Sony monitors that use Trinitron tubes and flat screens. As much as I would like to have a third P1100, sadly I do not. So, after receiving my TripleHead2Go I rolled up my sleeves and rearranged my desk to accommodate a third monitor, an older 17″ CRT with a curved screen. Even in this non-ideal situation, the triple monitor effect worked quite well. The size and shape mismatch of the third monitor is much more distracting on the Windows desktop (where that monitor can be a primary workspace) than it is in a simulation (where that monitor is primarily contributing to your virtual peripheral vision and rarely attracts your full attention).

While you may not rush out and buy a TripleHead2Go with three monitors just so that you can check your email on one screen, browse SimHQ on the second, and program your HOTAS on the third, the fact remains that multiple monitors can be a valuable enhancement to the overall computing experience. Also, if you have the TripleHead2Go connected to play simulations, then you get a triplehead desktop as well, so you may as well use it effectively.

As a dual monitor user before connecting the TripleHead2Go, I had the advantage of being able to compare my dual monitor experience to the triple monitor capability provided by Matrox. I am forced to say that the ease of use when working in a multiple monitor environment is lower with the TripleHead2Go than it is connecting the two video ports on my 6800GT to two monitors. The reason for this is almost entirely due to the fact that the TripleHead2Go reports itself as a single monitor. Thus, while Windows is aware that I have two separate monitors connected (and thus recognizes the edges of each screen area) when I use the two video ports on my 6800GT and connect them independently to my two P1100s using NVIDIA’s Dualview, Windows only sees one big monitor when using the TripleHead2Go.

The main drawback from this is that when the TripleHead2Go is used, the desktop is spanned across all three monitors without regard for the actual break between screens. Using multiple monitors in a non-spanned configuration is a much better idea for productivity purposes because various software programs can snap windows to different monitors, maximize windows to only one screen instead of the entire desktop, lock the mouse cursor to a certain screen, force separate taskbars that display applications that are active on only that screen, create merged wallpapers for multiple monitors, etc. Matrox includes software called PowerDesk SE that attempts to fulfill some of these functions. For example, it forces a window to maximize only to the screen it is on instead of the entire desktop, and the window that tasks open on can be selected. While maximizing to a single window is the single most needed feature in a multiple monitor environment (nothing is more annoying than maximizing your email client across three screens), overall PowerDesk SE falls short. Compared to excellent software like UltraMon, a favorite among multiple monitor users, PowerDesk SE lacks many features, especially the ability to quickly snap windows to different monitors. Even the maximize feature is quirky: it forces a maximum window size of the max resolution of one triplehead monitor, even if an additional monitor is using a higher resolution (e.g. a window dragged to a 1280×960 monitor will still only maximize to 1024×768 when three monitors are set up for a 3072×768 desktop and PowerDesk SE is running). In addition, Firefox spans all three monitors when full-screened (F11) even if PowerDesk SE is running (Internet Eplorer behaves as it should, though).

In addition, once installed from the software CD, PowerDesk SE creates no Start Menu entry and no desktop shortcut. If you want to run PowerDesk SE, you will have to navigate to \Program Files\Matrox Graphics Inc\PowerDesk SE and start it yourself. If you want to run it at startup (and most users will), you will need to create a shortcut and drag it into the Startup folder in the Start Menu. These are needless hassles, and these options should be taken care of automatically when installing the software. While these may seem like minor issues, they are indicative of the fact that it appears not much thought has gone into utilizing the TripleHead2Goeffectively in a 2D desktop environment.

One of the most annoying effects of the triple spanned display is during video playback. If you play back video with a non-4:3 resolution (such as digitally recorded NTSC video @ 720×480) and full-screen the video, it will expand to fill the vertical dimensions of the center monitor. But this means that the left and right edges of the video image are on the inner edges of the left and right monitors. This is extremely distracting and a solution needs to be developed to prevent this. Even worse is DVD playback of a widescreen DVD. This image sticks well into the left and right monitors, and during my testing the portion of the image on the right monitor did not display properly using PowerDVD. These issues made DVDs unwatchable when full-screened using the TripleHead2Go.

Software such as UItraMon is not free, but a lifetime license can be purchased for a nominal fee. If Matrox expects you to shell out hundreds of dollars for their hardware, they should include some decent desktop management software in the package.

Note that if you have never used multiple monitors before, you will likely find Matrox’s triple monitor environment quite rewarding, with the exception of video playback. Multiple monitors, however poorly controlled on the Windows desktop, are almost always better than a single monitor. A solution to the problem of video spanning screens is to utilize the second video output from your video card. I am fortunate that my P1100s support dual inputs, so I hooked up my right P1100’s Input #2 to the secondary output on my 6800GT. Extending my windows desktop onto this monitor and switching the monitor to Input #2 allows me to watch full-screen video and DVDs without problems as long as the application was on that monitor before it was full-screened. Of course, I can only view the right side of my spanned desktop or the independent desktop with this configuration, not both at the same time. I could hook up a fourth monitor and avoid this, but that seems slightly ridiculous. If you don’t have a monitor that supports dual inputs, you might be able to rig up something similar using a KVM switch, but the fact remains that you would be throwing hardware and a band-aid solution at a problem that can hopefully be avoided with better software.

The image below shows the TripleHead2Go in use with my 2 21″ flat screen CRTs and 17″ curved screen CRT. Note that I had to create this 3072×768 wallpaper image myself. The 17″ monitor is centered vertically with the 21″ monitors with the handy use of my Intermediate Mechanics text (stay in school, kids). 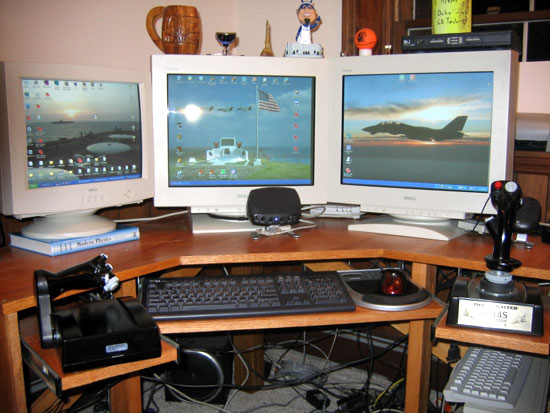