Back to Page 7
Falcon 4: Allied Force

F4’s photo-realistic cockpit is a tricky beast when trying to change resolutions. A few months ago a thread hereat Frugal’s World described how to edit Allied Force’s display.dsp file to gain non-4:3 resolutions. However, even with these edits the 2D cockpit is fixed at the upper left corner of the screen, and the 3D cockpit field-of-view is fixed at 60 degrees. In addition, there is a limit with DirectX 7 games such that a maximum horizontal resolution of 2048 pixels is supported; this means that Allied Force can be run at a maximum resolution of 1920×480 with the TripleHead2Go. At this resolution Allied Force is ugly and HUD and MFD text overlaps. 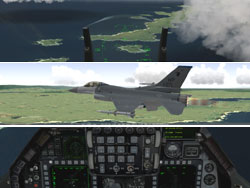 Also like Allied Force, you can run JF-18 at 1920×480, but you won’t want to. The field-of view is fixed and way too small for triplehead operation. 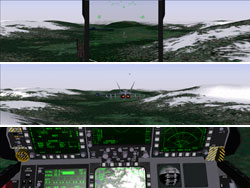