Pacific Fighters, patched to version 4.01, was tested in OpenGL with all video options set to medium (normal for Objects detail) using the in-game F4F vs. G4M track. 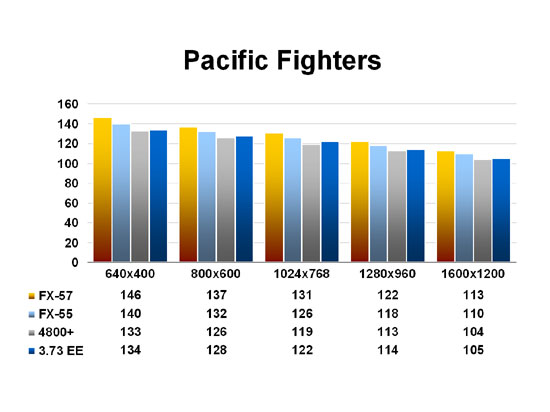 The software engine used for Maddox sims has always ran well on Intel processors, gaining a noteworthy advantage when the company introduced hyper-threading several years ago. Pacific Fighters continues this tradition, allowing Intel’s part to fare much better against AMD’s high-end processors than the other titles currently included in SimHQ’s benchmark suite. The FX-57 still maintained its expected performance lead, pulling ahead of the P4 EE by almost 10% at 640×480, and bested the FX-55 and X2 4800+ by 5% and 10%, respectively, yet the Intel processor squeaked out the smallest of victories against AMD’s fastest dual core. These scores between the P4 3.73GHz and X2 4800+ are something of an anomaly among the testing conducted for this article since it’s the only time the Intel part reached a performance parity with any of the tested AMD processors.

Chaos Theory is the latest in the Splinter Cell series of stealth games. The included Lighthouse demo was used for testing, with sound disabled and the .ini line for hardware shadow mapping set to false to increase the CPU workload (though this only affects performance by 1-2%). With the Radeon X800 XT installed in both test systems, and to lessen the chances of a performance bottleneck occurring in the graphics board, only the 1.1 shader profile was used during testing. 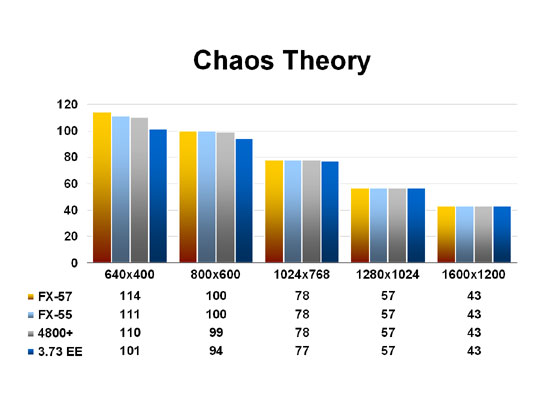 As with LOMAC, Chaos Theory likewise sees the performance gap that occurs at lower resolutions quickly narrow as the resolution is increased. At 640×480, however, the installed Radeon X800 XT still allowed the processors to differentiate themselves somewhat, with the FX-57 beating the Intel Extreme Edition part by roughly 13%. Performance among the AMD parts at the lower resolutions was very close, with the scores becoming basically identical from 800×600 and on up. Chaos Theory is a title that would clearly benefit more from increased graphics rather than system processing power.

Call of Duty was configured with its video settings placed at their highest options since the title, based on the aging Quake 3 engine, hardly strains the latest high-end graphics boards. Scores were obtained from the Dawnville demo using the in-game timedemo utility to capture performance. 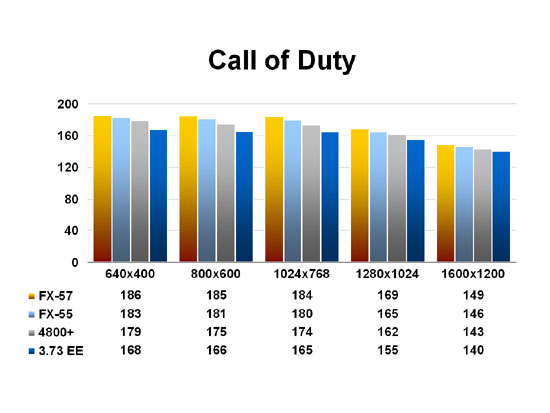 While the AMD parts all soundly left the tested Intel processor behind, the performance scores between them were statistically insignificant at such a high frame rate. The FX-57 pulled ahead of the FX-55 and X2 4800+ by such a small percentage that Call of Duty is most likely more limited by system bandwidth than anything else.