Last is NASCAR Racing 2003 Season, tested using a crowded Daytona track and a camera view set inside of Earnhardt’s cockpit. Graphics settings for detail levels were set at high, with effects and features unchecked, and texture filtering quality set at normal; the lighting and shadow options were both enabled to increase the CPU workload. 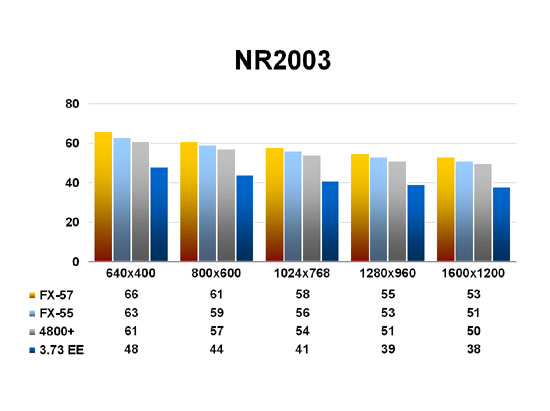 NASCAR showed a pattern similar to some of the other tested titles in that the FX-57 outperformed the X2 4800+ by almost 10%, with the FX-55 taking a middle of the performance road position between the two. Again, all three AMD parts significantly outscored Intel’s P4 3.73GHz processor, putting the FX-57 30% ahead of Intel’s part across the tested resolutions.

With the FX-57 AMD has strengthened the performance lead over Intel the company has enjoyed for the past several years. This new flagship part absolutely overshadowed the P4 3.73 Extreme Edition in every title used for testing, often by margins that are, quite frankly, rather embarrassing for Intel, a company that once dominated the desktop market for so many years. Beyond a performance perspective, however, the FX-57’s thermal design allows the processor to run cooler than Intel’s Prescott cores, which means less power consumption, which means less heat, and which, in turn, naturally means less noise since the part can be cooled by quieter solutions. And the added support for SSE3 instructions and tweaked memory controller only add to the perceivable value of this new part. 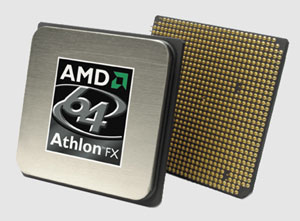 The FX-57 is, without a doubt, the fastest processor-single or dual core-currently available on the market, its 200MHz clock bump only allowed it to outperform the other tested parts from AMD by a somewhat small margin, leaving the new part in a rather tough spot of justifying its four-digit price tag. With the FX-57’s release, AMD chose to introduce the flagship processor at a higher price point, effectively leaving the FX-55 pricing unaffected by the introduction of the new part. Yet this strategy places the FX-57 beyond the wallets of everyone except the most zealous of hardware enthusiasts, though this situation could simply be indicative of AMD’s confidence in their current position, knowing full well that Intel gambled on the frequency road with their desktop parts and lost, and leaving AMD’s Athlon 64 processors the unchallenged must-buy parts for those in the high-end desktop market.

While the FX-57 is undisputably the current pinnacle of gaming performance, and sports the improvements found in the San Diego core, its towering price point is something of a necklaced albatross and a trend SimHQ hopes is short lived.