Despite the obvious need for improved efficiency, image quality and video output is of great importance for graphics boards, and ATI has improved upon their previous parts with the Radeon X1000 family in a number of ways. First, the company has introduced a new processing engine for improved video quality dubbed Avivo. Through Avivo, Radeon X1000 parts boast improved WMV, MPEG, and MPEG-2 decode performance and add support for accelerating H.264 in hardware, a codec that will become rather common with upcoming electronics and discs (such as HD-DVDs). The Radeon X1000 boards also support dual-DVI outputs, allowing each card to drive multiple LCDs, even high resolution units such as Dell’s new 30″ widescreen 3007FWP display.

Second, one of the areas in which the previous R300 and R400 parts are lacking is the ability to perform HDR (high dynamic range) blending, which prevents these boards from running the HDR ‘modes’ of games like Chaos Theory or Far Cry. The new Radeon parts remedy this by supporting multiple HDR blending formats, including integer, floating point, and custom formats. Furthermore, ATI has taken HDR quality to a new level by adding functionality to the ROP units that enables them to combine all available anti-aliasing modes with HDR rendering using floating point formats (standard AA works fine with integer-based HDR, such as Valve’s “Lost Coast” demo). End users are therefore not forced to choose between one or the other, though with ATI arriving somewhat late with HDR blending support, titles such as Far Cry require an update to allow HDR + AA to function properly. 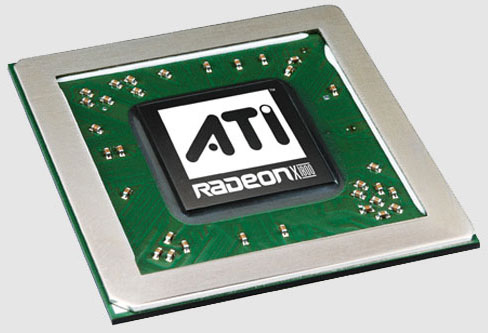 Third, the Radeon X1000 boards also support new texture filtering and anti-aliasing modes that benefit overall display quality. Previous generations of Radeons performed anisotropic texture filtering on a angle-dependent basis, an optimization which results in off-angle surfaces being filtered at a reduced quality. Users can now enable a High Quality anisotropic filtering option in the control panel that performs the requested filtering on an angle-independent basis, thereby improving overall texture quality filtering. The performance hit incurred by his new mode, however, is dependent upon the amount of off-angle surfaces being filtered in each frame.

Last for discussing improved image quality, a new anti-aliasing mode known as adaptive AA (AAA) is also available. This option combines multi- and super-sampling modes of anti-aliasing for dealing with transparent textures commonly used by developers for things such as foliage or chain link fences. Because multi-sampling, the standard AA technique supported by modern GPUs, deals with geometry and not texture data, transparent textures can create a considerable amount of aliasing in a scene that standard multi-sampling cannot address, depending upon how heavily they are used. Adaptive AA works by detecting the presence of these transparent textures and applying super-sampling to them to reduce the aliasing they cause. The graphics IHVs moved away from super-sampling years ago because of its low comparative performance to multi-sampling, so the performance hit of AAA will be dependent upon the amount of transparent textures in a given scene. We’ll test these various display quality options and see how well they perform later on.

The Boards – Power In and Sound Out

All three of the test boards are PCI Express x16 parts. Both the X800 XT and X1600 XT are 256 MB memory, single-slot cards. The X800’s video outputs consist of standard VGA, S-video, and one DVI, while the X1600 offers dual DVI and S-video. The X1600 lacks a rear connector for pulling additional power directly from the system’s PSU since the 75 watts supplied by the PCI Express slot supplies sufficient power for the card, unlike the other two test boards. The X1800 XT, in contrast, is a massive, dual-slot add-in card, sporting eight memory modules arranged in a half-moon arc around the graphics chip that total 512 MB of onboard RAM. The reference fan uses the additional space of the backplate bracket to expel out the rear of the case as it pulls air across the copper cooler mounted over the graphics and memory chips.

Before getting too deep into the heart of the article-the benchmark scores-we thought we’d examine the environmental attributes of the reviewed boards. The power usage of the test system was recorded using a Extech 380801 power meter and sampled at the desktop and while under load, the second scenario created by running 3DMark05’s three game tests. System noise was also sampled using a digital sound meter at the same time for both scenarios, with the meter placed several inches from each graphics board and facing its fan. Worth noting is that both sets of measurements are affected by other components installed within the test system, so the recordings shown below reflect their impact on the measurements (e.g., a CPU will of course draw more power while running a 3D application compared to sitting at the Windows desktop, making it impossible to fully isolate the graphics cards tested in this review).

With 256 MB of onboard memory, the X800 and X1600 both have a lower power draw in both scenarios, though under load the X800 increases its utilization by almost 100 watts while the X1600 pulls an additional 80 watts. The X1800, however, with 512 MB and a larger, more complex graphics chip sees a much higher power usage under load, a draw increase of over 120 watts.

All three test boards fall within roughly the same range for noise levels, though the fan on the X1800 does generate more sound under load than the other boards. By means of comparison, the Zalman 7000 cooler installed on the FX-60 was roughly 10 dB louder than the X1800’s fan under load. Also worth noting is that the tested coolers are reference designs that board partners could deviate from with cooling solutions that would obviously have different sound characteristics.