Lock On: Flaming Cliffs was tested using the “SU-25T vs. two A-10” replay with the graphics settings at high (heat blrs off). 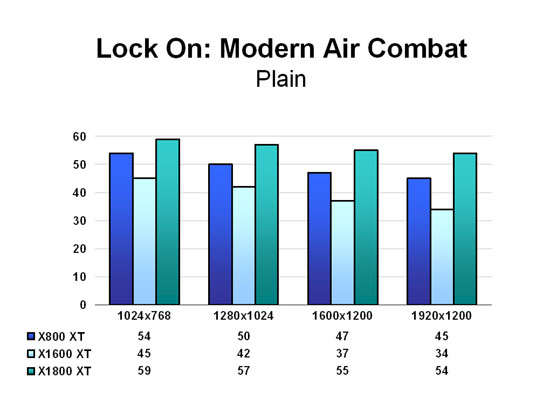 Flaming Cliffs produced playable frame rates for all three test boards across the four resolutions. The test scores, in fact, appear to be heavily processor-limited since the X1800 outperforms the X800 by only 10% at the lowest resolution, and all three boards show a fairly small performance delta between their highest and lowest frame rates; the X1800, in particular, exhibits the worst pattern of being bottlenecked by the test system’s CPU, losing only five frames across the tested resolutions, while the X800 lost nine and the X1600 11 frames. 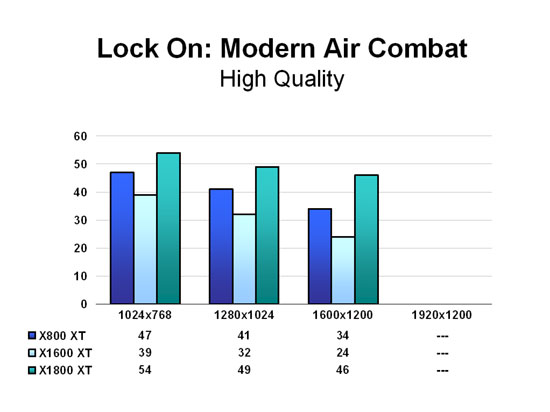 With both anti-aliasing and anisotropic filtering (again, only 2xAA and 4xAF for the X1600) enabled, there is a slightly higher variance in the scores for all three boards, though at 1920×1200 no level of AA could be applied to Flaming Cliffs. In addition, all three boards saw a fairly insignificant performance drop with the higher quality settings enabled at 1024×768, though the delta increased as the resolution scaled higher. With in-game settings at high, the X1600 was able to produce playable frame rates up to 1280×1024. The X800’s score at 1600×1200 of 34fps is likewise playable, though the older part was significantly outperformed by the X1800 at these settings. The X1800 was over 33% faster at 1600×1200, losing only eight frames from 1024×768, while the X800 saw a loss of 13 frames. With a 50% higher memory bandwidth advantage, it comes as no surprise to see the X1800 take a lower performance hit once anti-aliasing is enabled.

Pacific Fighters was run in OpenGL mode with all video options set to high (landscape at perfect) and tested using the “F4Utt” track. The conf.ini file was edited to enable the two non-4:3 ratio resolutions of 1280×1024 and 1920×1200. ATI boards perform better in IL2 games in D3D mode, but we wanted to test with the landscape option set at perfect. 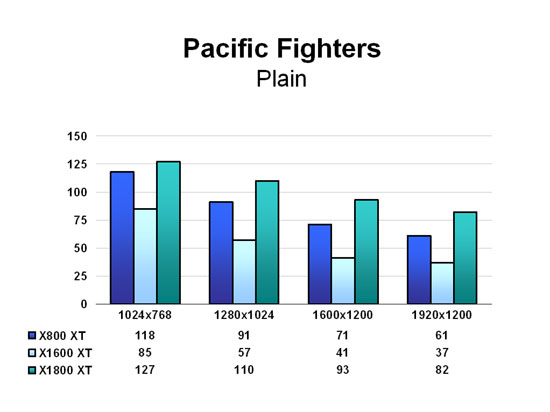 Again, the three test boards saw playable frame rates across all resolutions used. The X1600 lost over half its score of 85fps as the resolution scaled upward, dropping down to 37fps at 1920×1200. The X800 performed likewise across the resolutions, seeing almost half the frame rate at the highest resolution as it did at the lowest. In contrast, the X1800 lost just slightly over one-third is performance despite the fact that at 1024×768 its score wasn’t even 10% higher than that of the X800. 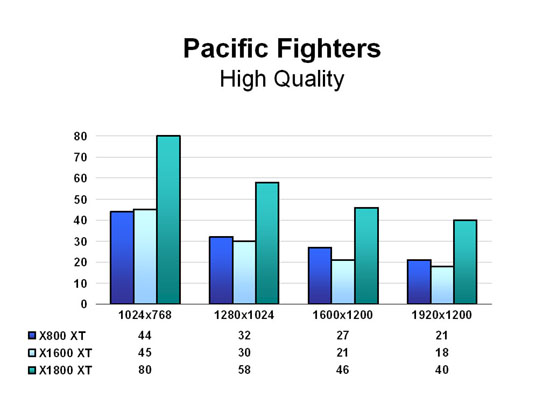 All three boards saw sharp frame rate decreased with anti-aliasing and anisotropic filtering enabled, though the latter tends to have the worst impact on performance with Pacific Fighters. As with Flaming Cliffs, this simulation also sees the X1600 producing playable frame rates at the two lowest resolutions. Readers should bear in mind, however, that in-game settings could be set as less demanding options, allowing the end user to use higher resolutions if they so desired. Even the X800 struggled at the higher resolutions, with the X1800 scoring basically 100% higher at 1920×1200. The F4Utt track does not require a lot of textures, so it is doubtful that this performance disparity is due to the additional onboard memory of the X1800. Yet even the new high-end board also saw its frame rates cut in half across the tested resolutions.