Microsoft’s Flight Simulator 2004 was configured with high settings enabled across its four display panels, with the max texture slider set at full and hardware lights at four. SimHQ’s demo is of a short dusk flight over Hong Kong city. 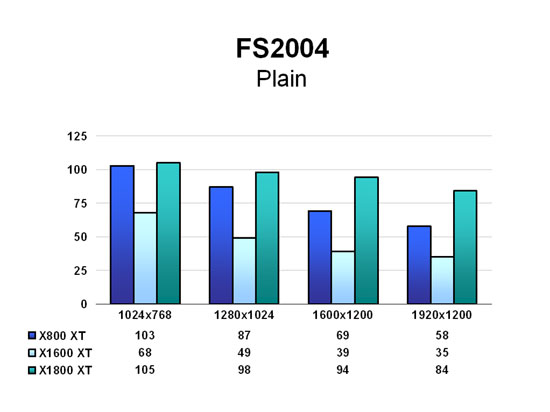 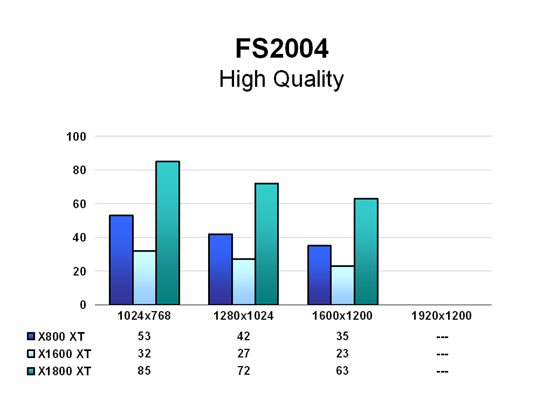 The same as Flaming Cliffs, MS2004 would not work at 1920×1200 with anti-aliasing and the X800 and X1600 both saw significant performance drops with the high quality settings enabled. With 2x anti-aliasing and 4x anisotropic filtering, the X1600 barely pulled above 30fps at 1024×768. MS2004 has a plethora of configurable options in its display menus, so those in the market for a mainstream graphics card should bear in mind the ability to balance in-game settings with higher forms of resolution, anti-aliasing, and texture filtering. At 1024×768 the X1800 starts out as roughly 40% faster than the X800, and pulls ahead by 80% at 1600×1200, doubling the percentage of its performance lead as the resolution was increased.

Chaos Theory was tested using the Lighthouse demo. The shader profile for SM2.0 was used and options such as parallax mapping and high quality soft shadows were enabled. 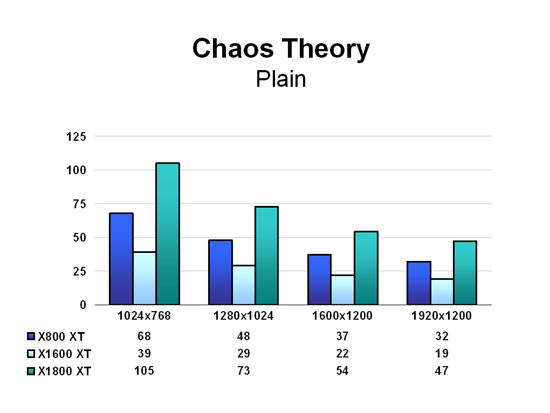 Chaos Theory is the first game tested that is simply too demanding for the X1600 at the higher resolutions. This is most likely due to the use of HQ soft shadows, an option that requires the filtering of shadow map edges. Regardless, even with high in-game settings the X1600 scored 39fps at 1024×768, and for those who don’t demand high frame rates while stealthing the board produced 29fps at 1280×1024. The X800 turned in playable scores at all resolutions, though it saw its frame rate cut in more than half by 1920×1200. This was also the case with the X1800’s scores, though the new high-end card outperformed the X800 by over 50% in all four resolutions. 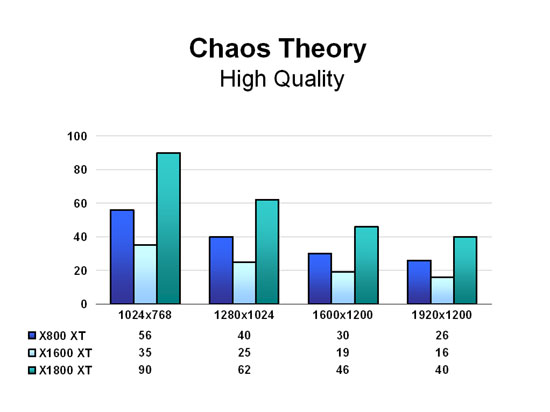 Enabling anti-aliasing and anisotropic filtering for all three test boards produced a fairly insignificant performance loss in Chaos Theory across all four resolutions. The X1600 remained playable at 1024×768, and possibly 1280×1024, while the X1800 retained its 50% performance advantage over the X800 in all resolutions.