The beginning of Call of Duty 2’s Prisoner of War map contains lots of transparent textures due to the grass, bushes, and trees scattered across this portion of the level. SimHQ’s custom demo thus represents a good test for ATI’s Adaptive AA support. AAA has two settings, a performance mode that applies super-sampling at half the rate of the requested AA, and a quality mode that matches the specified number of samples. The Radeon X1800 XT was tested at standard 4x AA and then again with both AAA modes to examine how performance was impacted by the heavy amount of transparent textures scattered across this demo. 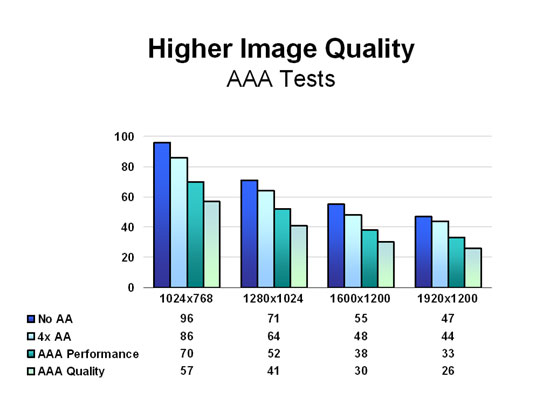 Enabling 4x multi-sampling cost roughly 10% performance for the X1800 across all four resolutions. In contrast, Adaptive AA in its performance mode increases that performance degradation to around 30% in each resolution, bringing the frame rate down to 33fps at 1920×1200. The quality mode only worsens this pattern, increasing the impact by roughly 15% more until only the two lower resolutions of 1024×768 and 1280×1024 exhibit playable frame rates on the X1800 XT. Again, the performance impact of Adaptive AA over regular multi-sampling will be dependent upon the amount of transparent textures in a scene.

The Prisoner of War level also has a fair amount of off-angle surfaces for testing the performance hit of ATI’s High Quality anisotropic filtering. The X1800 XT was again used, with 8x AF tested in both standard and HQ modes to see the performance
impact the new filtering option would have in this test. 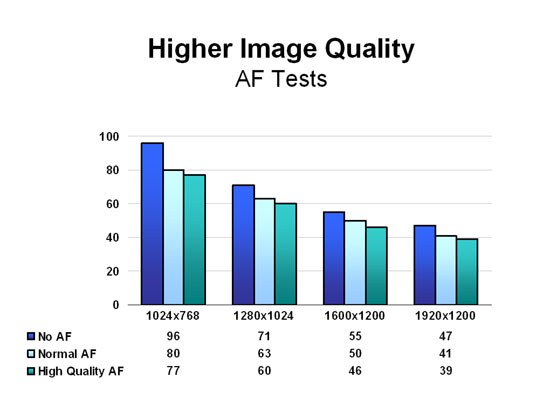 Comparing the performance loss caused by standard 8x anisotropic filtering to that caused by 4x anti-aliasing we can see that improved texture filtering has a slightly more negative impact on frame rate. At 1024×768 the frame rate dropped by over 15%, though with the performance loss lessening to roughly 10% or slightly higher at the other resolutions. Unlike Adaptive AA, HQ AF does not incur a significant performance penalty in SimHQ’s custom demo, costing only a few frames beyond standard anisotropic filtering in each resolution, though the impact again varies depending upon the amount of off-angle surfaces being rendered.

Having examined the performance costs associated with Adaptive AA and HQ anisotropic filtering individually, the higher quality numbers reflect performance scores based on having both features enabled with the Prisoner of War demo. The performance mode of AAA was used. 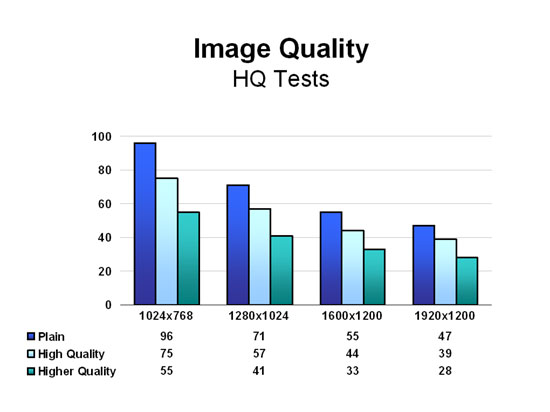 It is unfortunate ATI decided not to support higher samples of its standard anti-aliasing with this new generation; the 6x option has been available since the 9700 Pro’s launch in the fall of 2002. Not increasing the number of samples was most likely based on performance concerns, though, since the current ROP units are capable of handling 2x multi-sampling AA in a single clock cycle, whereas 4x and 6x require two and three cycles, respectively. Running 8x AA with the current ROP engine would therefore consume four clock cycles, cutting deeply into the raster performance of even the X1800 XT.

The intro movie to Falcon 4: Allied Force, a 91 MB AVI file, was used to test the video transcoding speed of AVIVO. Windows Media Encoder, a multi-threaded application, was used to convert the file to a WMV9 format in a single-pass transcoding, which took the FX-60 2:32 to complete. The Radeon X1600 XT and X1800 XT, using ATI’s AVIVO video converter tool, was able to finish the job in 33 seconds. This difference in conversion times — particularly over the fastest dual-core processor currently available on the market — should have every home video editor’s rapt attention. Worth noting, however, is that ATI’s program lacks a number of options in its current incarnation, such as two-pass encoding, though the company plans to continue improving its functionality in the coming months.