Call of Duty 2 was tested with a custom demo from the Prisoners of War single-player map. The game was configured in its DX9 rendering mode with all texture options manually set at high. 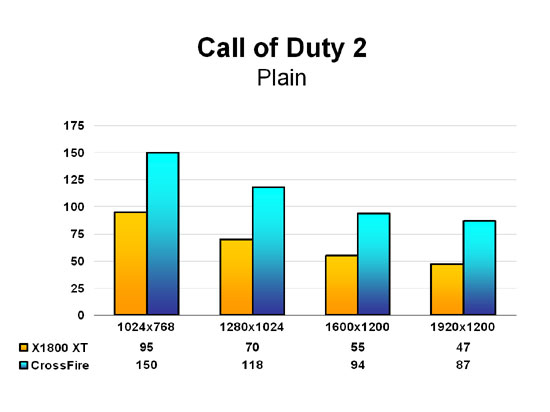 As with Chaos Theory, Call of Duty 2 exhibits very strong performance gains with CrossFire enabled, with the percentage of improvement between the two graphics configurations again widening as the resolution was increased. 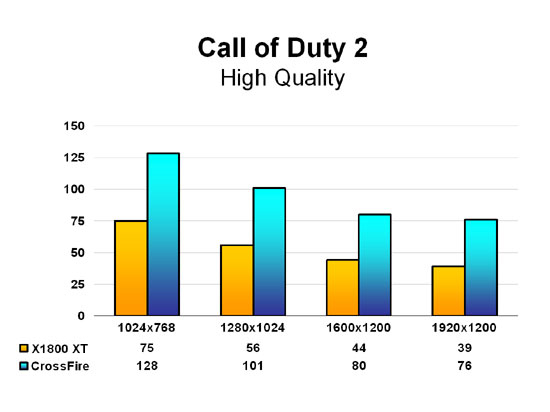 The dual-card solution continued scaling its performance above that of a single board as more graphically-demanding settings were used. Beyond 1024×768 CrossFire displayed roughly a 85% or higher gain over a single X1800. The high performance, even at 1920×1200 with 4x AA and 8x AF, allows the end user some frame rate wiggling room for higher modes of anti-aliasing and/or ATI’s high quality anisotropic filtering.

rFactor was tested with a custom demo recorded on the Sardian Heights race track. The DX9 shader profile was selected for all tests. Worth noting is that the configuration tool lists rFactor’s application support for anti-aliasing as a super-sampling scheme. 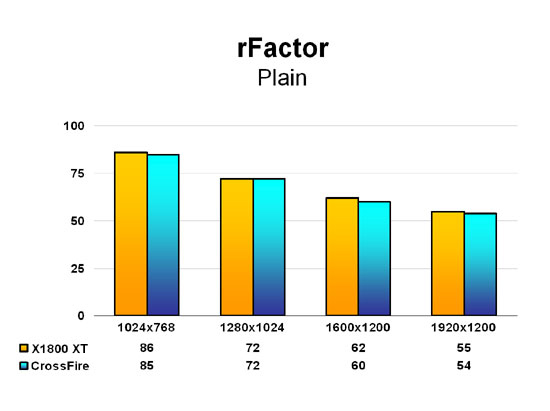 As with Flaming Cliffs, rFactor shows a loss of a few frames with CrossFire, though the performance variance is well within margin of test errors. 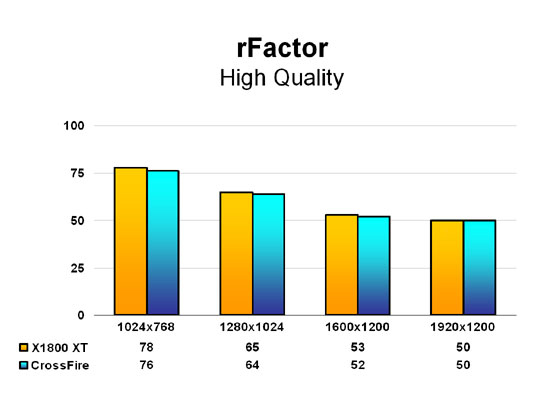 High quality presents a similar pattern of CrossFire lagging a few frames behind the single X1800’s results. This is yet another example of why ATI needs to allow custom CrossFire profiles by end users since rFactor is obviously not scaling with the default SuperTile mode.

For titles that have not been profiled by the driver team, ATI suggested renaming the executables to “AFR-FriendlyD3D.exe.” With Catalyst A.I. enabled, CrossFire will attempt to use AFR with the application (so long as it uses Direct3D and not OpenGL, obviously) to give it a performance improvement. SimHQ tried this with rFactor but the sim repeatedly crashed to the Windows desktop when attempting to load the recorded track. Flaming Cliffs is so CPU-intensive that it failed to display any performance gains, and MS2004 uses Windows GDI for its menus, so it is incompatible with AFR. And Pacific Fighters, in D3D mode, likewise exhibited no performance improvements.