Radeon graphics boards have offered a maximum of 6x multi-sampling anti-aliasing since the 9700 Pro. Yet for CrossFire ATI has increased the end users AA options to include additional samples. Once CrossFire is enabled the Catalyst driver panel’s slider shows added options for 8x, 10x, 12x and 14x AA. ATI calls these additional AA modes SuperAA. 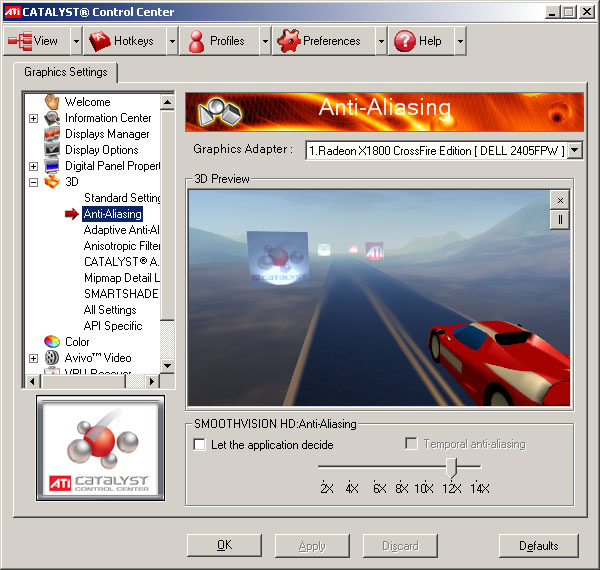 The new 8x and 12x AA modes are fairly straightforward extensions of the 4x and 6x options available with single Radeon boards; choosing either mode simply forces each board in a CrossFire configuration to perform half the requested number of samples. Thus enabling 8x SuperAA will require each board to perform standard 4x AA, with the compositing hardware blending the color values produced by each board together to produce a final image. SimHQ therefore tested a single X1800 XT board in 4x and 6x modes with Call of Duty 2 (no anisotropic filtering), and then in CrossFire mode at 8x and 12x. 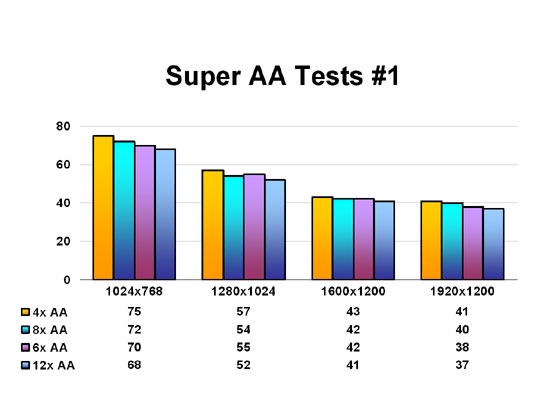 As shown above, while each board with CrossFire enabled is rendering four or six samples, the same as a single board tested in 4x or 6x AA modes, there is still a slight performance hit in Call of Duty 2 for these SuperAA options. That said, the frame rate loss is surprisingly small and is perhaps a testament to the new compositing engine ATI chose with this iteration of CrossFire.

The remaining two SuperAA modes, 10x and 14x, are mixed modes, combining the standard single-card options of 4x and 6x anti-aliasing with a rotation in the texture sample position. This change in position is achieved by forcing each board to render its pixel centers at a different axis to one another. Thus, when the final color values are blended by the compositing chips, there is a slight reduction in texture aliasing (a la super-sampling) due to the color offset from the altered positions of the texture samples. The 10x and 14x modes, therefore, still offering the same number of samples as the 8x and 12x modes. 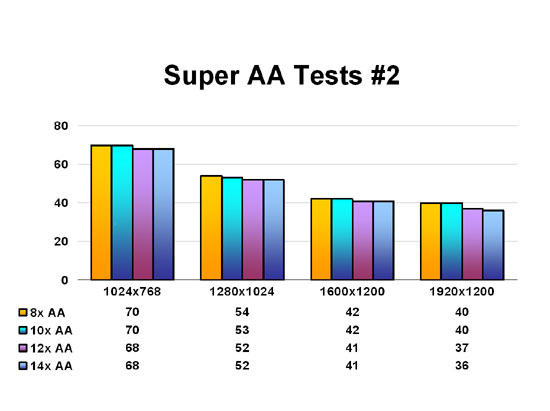 These performance of these last SuperAA mode scores are not too surprising, considering that the same number of samples are being produced in 10x and 14x modes as 8x and 12x. And depending upon subjective attitude toward frame rate, Call of Duty 2 might still be playable with all SuperAA modes.

As for the image quality produced by these SuperAA modes, because the output is blended by the compositing hardware it is unfortunately impossible to use a 3rd party tool such as Fraps to capture the final image from a frame buffer. That said, there is a noticeable improvement in overall edge quality with 8x and higher AA enabled, though these modes definitely fall into the category of diminishing returns both visually and when performance is also considered. And certain angles do not present as clean an edge as one would expect from these higher AA modes; this is most likely the result of unoptimal sample patterns being used for these modes. In addition, the mixed modes of 10x and 14x do very little to reduce general texture aliasing-enabling 8x or even 16x anisotropic texture filtering is far more useful in this area, though the mixed modes do help somewhat with alpha textures.